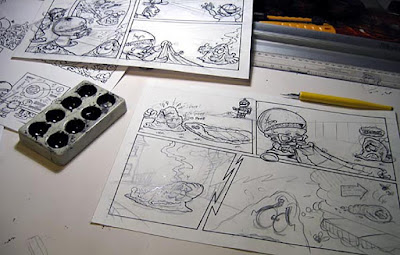 Not much I can report today as I'm working on stuff that won't be released yet but here's an old photo I found on a memory stick whilst looking for something else. It's a photo of my drawing board from 1st May 2007 when I was part way through drawing a Team Toxic strip for Toxic No.95.

Back then, as you can see, I was inking with a dip-nib. I've tried various tools for inking over the years. Throughout the 1980s/90s I was mainly using Rotring pens. I used dip-nibs for a few years, then UniPin fineliners, and in more recent years a mixture of Japanese brush pens and UniPin pens.

Why change? Well, sometimes it depends on how the pens cope with the drawing surface. The type of Bristol Board I used in the 80s/90s became obsolete and the type I had to switch to wasn't so suitable for Rotrings. With dip-pens, I got a bit tired of them splattering, and was also aware my lines were not delicate enough where I needed them to be.

At the moment, the brush pens and UniPin pens seem to suit me OK, but who knows? I might find a pen that I like better soon and switch to that. You never know.

A lot of colleagues draw digitally now, and the results look pretty good, if a bit too clinical from some artists. I've dabbled with drawing on an iPad but wasn't keen on it. I've never used a Cintiq and they're way out of my price range anyway. I'll stick to what I feel comfortable with for now and just use technology (Photoshop) for colouring.

Hi Lew,
Your style is perfect for an Ipad. Especially if the drawing is going to end up in photoshop anyway. Really amazed how you manage to clean up your scanned images because your finished drawings look really crisp.

By the way hope you are keeping backups of your digital files.

Thanks quamar. Yep, always keep backups. The problem I have with drawing on an iPad is I don't like the feel of the stylus on the glass. Just feels unnatural to me. I have the Procreate app but haven't done much with it.

As for cleaning up scanned images: for the past several years I've been using a blue pencil so the scanner only picks up the inks if scanned as a bitmap. I can then zoom in and erase any flaws, or make corrections. I draw my work twice the printed size, so that hides a few flaws too.

They sell these little caps for the apple pen nibs that give a bit of friction. Havn't tried them though.

Nah, still doesn't appeal I'm afraid. It's still glass rather than paper, and I spend enough time looking at a screen as it is. :)