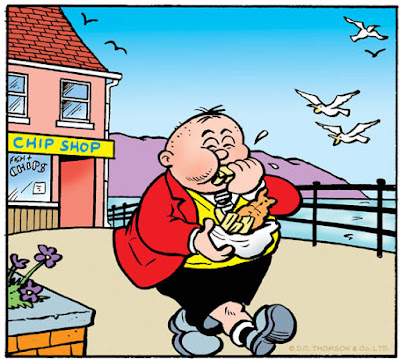 There seems to be a food and drink theme to my strips this week! In The Beano, Fatty guest-stars in my Rasher strip, while over in Doctor Who Magazine No.499, the Eighth Doctor swigs an elixir in my Daft Dimension strip.

Both available now from any good newsagent and supermarket! 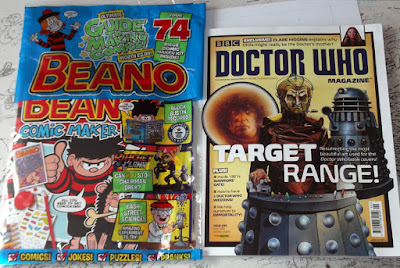 Posted by Lew Stringer at 22:17 No comments:

Email ThisBlogThis!Share to TwitterShare to FacebookShare to Pinterest
Labels: Doctor Who Magazine, Rasher, The Beano, The Daft Dimension 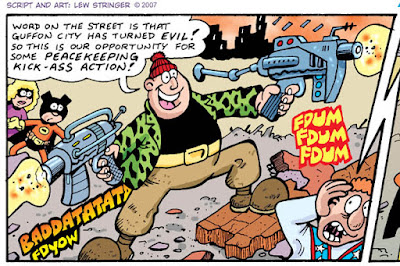 There's a new interview with me online at the Pipedream Comics website conducted by Olly MacNamee where I waffle on about comics. You'll find it here:
http://pipedreamcomics.co.uk/interview-lew-stringer/

Posted by Lew Stringer at 12:16 No comments:

Email ThisBlogThis!Share to TwitterShare to FacebookShare to Pinterest
Labels: interview

Ol' bobble hat is back! 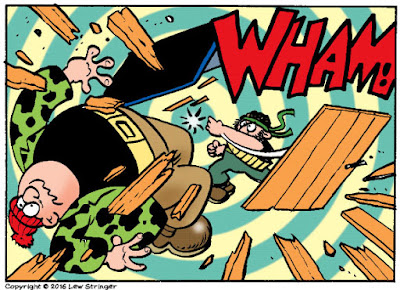 The latest edition of online comic Aces Weekly has just gone live and it contains a brand new exclusive Combat Colin three-pager by me. This time ol' bobble hat is pitched against his best friend, Semi-Automatic Steve! What's going on? To read the whole story, sign up for Aces Weekly and see the strip in Volume 21, issue 7.
http://www.acesweekly.co.uk 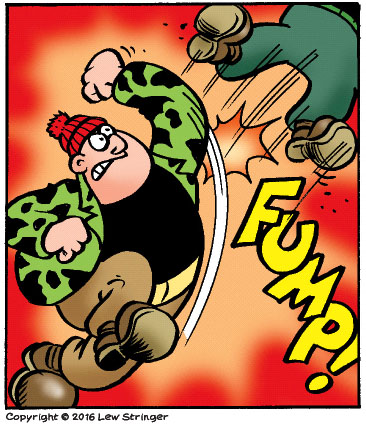 Only £6.99 for a seven issue volume. Buy it through Paypal!  Use any card!  Grab any of the great Previous Volumes or get right on board the currently-running volume with an ongoing subscription for JUST £1 - or just over a dollar or a Euro - per week!  A new issue of Aces Weekly is uploaded every Monday night. Each volume consists of 7 weekly parts, and then future volumes right on after, till they run out of great comics (unlikely ).  As soon as you hear via email that your payment's been accepted - usually no longer than 5 minutes - you can log in with your chosen password and get Aces Weekly on your tablet, laptop, desktop, or SMART TV!

Each issue consists of six stories, and I'm pleased that Marc Jackson is on board this latest issue too with a new delightfully daft Duckless story! Don't miss it! 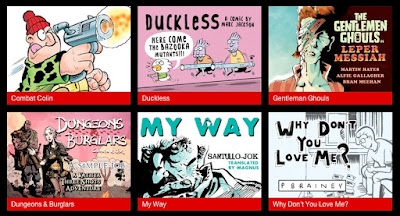 This is the fourth new Combat Colin story I've done for Aces Weekly. You can read about the previous ones here:
http://lewstringercomics.blogspot.co.uk/2015/07/combat-colin-lives.html

Posted by Lew Stringer at 20:46 No comments: 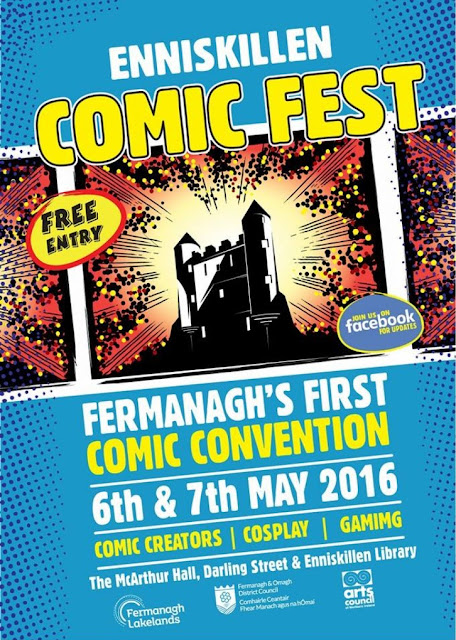 I enjoyed the Birmingham Comics Festival yesterday and it was good to see so many familiar faces and to meet new people. The next event I'm attending with be on Friday 6th May and Saturday 7th May when I fly out to the Enniskillen Comic Fest in Northern Ireland. Other guests include Phil Winslade, Glenn Fabry, Laura Howell, Hunt Emerson and more! Details here:
https://www.facebook.com/Enniskillen-Comic-Fest-1030761763641321/
Posted by Lew Stringer at 19:00 No comments: 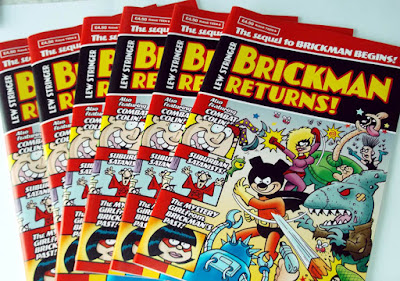 The Birmingham Comics Festival has just revealed the timetable of panel discussions for Saturday's event at Edgbaston Stadium. I'll be on two of the panels so I hope to see you there! The rest of the day I'll be at my table doing sketches and selling copies of Brickman Returns! (Yes, still some left from the second printing. Don't miss out!) My table is in Hall 1, situated between Ian Kennedy and Laura Howell.

Here's the timetable for the panel discussions...

This year’s panels will be held upstairs in the 'Room with a View' which is adjacent to the Banqueting Suite.

11.00am - Must Be Something in the Water – Brummie creators and their Black County brethren explore the reasons the region’s given birth to such quality talent and draws others to come live here, creating comics read all over the world.

11.30am -God Bless America – Boom! Marvel, DC, Dark Horse, AfterShock and Image, all important publishers based in the USA, and we’ve got some of their fantastic creators ready to talk about the books they’re working on for them!

12.30pm - Diversity or Damnation? – “Is there any reason that character has to to be a guy?” Questioning stereotypes in comics, and the merits of shoehorning a situation to fit an untapped marketing demographic with star guests from across the spectrum of comics and cosplay.

1.30pm - Classroom Comic Capers - Literacy and low bow culture: Is there room for comics in the classroom? Can they teach or should they just entertain? A heated debate between teachers and those working on the frontline of creating comics for today’s readership.

2.30pm - Better The Devil you Know - What makes one collaborative team work and another fail? Is working for one publisher better than the other because of what they pay you, the characters you get to draw or the respect you’re given? Those on the receiving end, both good and bad have their say.

3.15pm - British Intelligence – Sci-fi, war, superhero reprints and stripy t-shirted troublemakers. Find out what it takes to put your favourite British comics on the newsstand, by the people who make them.

4-30pm - Cosplay Competition - It's your chance to shine like a star.  Entrants to our four categories have the chance to win trophies and prizes.

For full details of the event see the con website:
http://www.thecomicfestival.com/
Posted by Lew Stringer at 16:57 No comments: 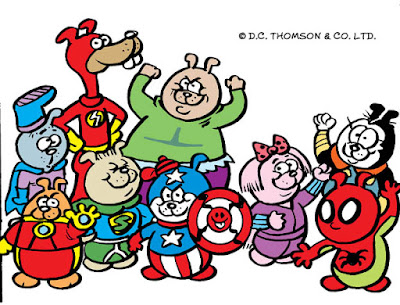 Stoke Con Trent was a great convention and you can read my thoughts about it here (http://lewstringer.blogspot.co.uk/2016/04/super-stoke.html). No time to rest though, as it's the Birmingham Comics Festival this coming Saturday in Egbaston (http://www.thecomicfestival.com/), - and over the next few days I need to get a few pages of work done. Busy week!

Conventions attract a lot of cos-players these days and even The Bash Street Dogs get in on the act in this week's Pup Parade story in The Beano. Out on Wednesday!
Posted by Lew Stringer at 01:24 No comments: 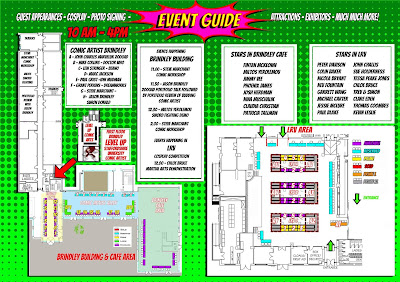 Here's the floor plan of where you'll find us all at Stoke Con Trent on sunday (17th April). I'll be sketching and bringing along copies of Brickman Returns, so drop by my table even if it's only for a chat. It's always good to meet the readers past and present.

More info:
http://stokecontrent.co.uk/stoke-con-trent-4-event-guide/
Posted by Lew Stringer at 10:42 No comments:

Here's a few quick snapshots of the strips I have in print this week. In D.C. Thomson's The Beano there's another full page Pup Parade... 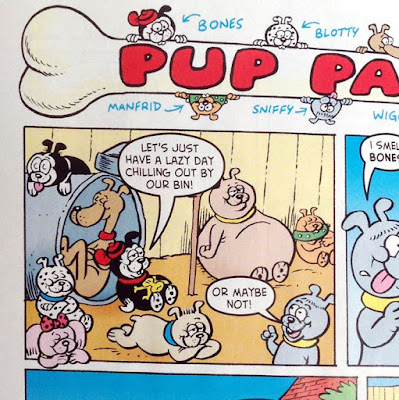 ...and a puzzle page featuring Sniffy! 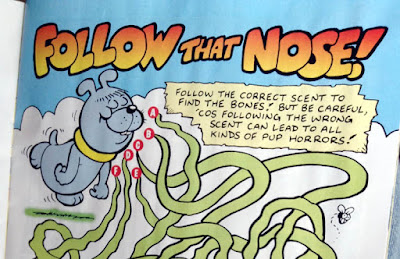 Over in Egmont's Toxic magazine there's a two page Team Toxic strip as they encounter The Tentacles of Doom! 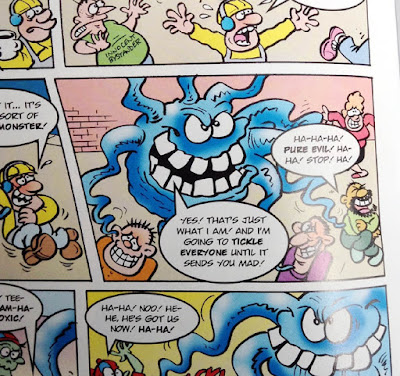 You'll find both The Beano (£2.50) and Toxic (£2.99) in newsagents and supermarkets across the UK. Support British comics!
Posted by Lew Stringer at 17:33 No comments:

Here's an updated list of the conventions I'm a guest at this summer, now adding Macclesfield and Shrewsbury. Don't forget it's Stoke Con Trent this Sunday! Hope to see you there. 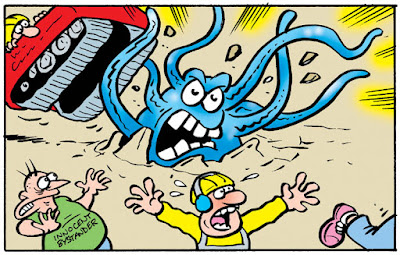 Here's a quick preview of a panel from my Team Toxic strip for the next issue of Toxic. Drilling in the city awakens a monster from beneath the Earth. That can't be good news for the locals can it? Find out what happens next in Toxic No.270, on sale Wednesday 13th April! Available from newsagents and supermarkets across the UK.
Posted by Lew Stringer at 22:42 No comments: 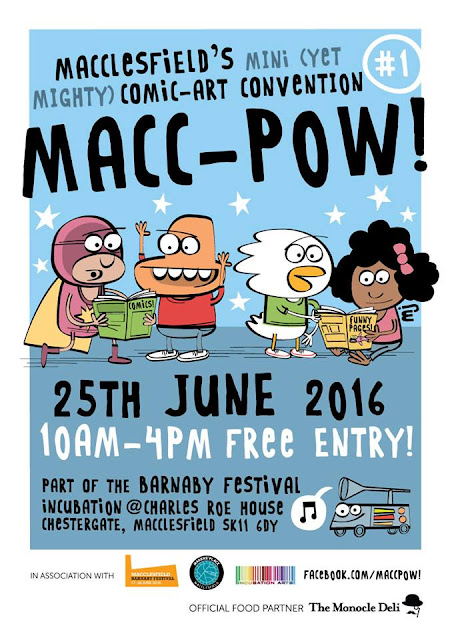 I'm very pleased to add another event to my convention schedule this year, as I'll be a guest at Macc-Pow! in Macclesfield on June 25th. I'm very flattered at the glowing announcement on the convention Facebook page too!

"We are beyond thrilled to announce that our first guest will be none other than cartoonist Lew Stringer! Over the years Lew has worked for Marvel UK, The Beano The Dandy and many, many more amazing publications and publishers. It’s such a thrill to be welcoming him to our mini-con, he’s one of the good guys!"

Hope to see some of you there! For more updates and guest announcements, check out the Macc-Pow Facebook page. (You do not have to sign up to Facebook to access the page.)
https://www.facebook.com/maccpow/
Posted by Lew Stringer at 11:21 No comments: 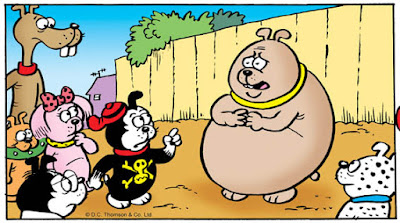 Here's a quick preview of my second Pup Parade strip that you'll find in next week's Beano. Why is Tubby worried? Find out in The Beano No.3829, on sale Wednesday 6th April!
Posted by Lew Stringer at 21:47 No comments: