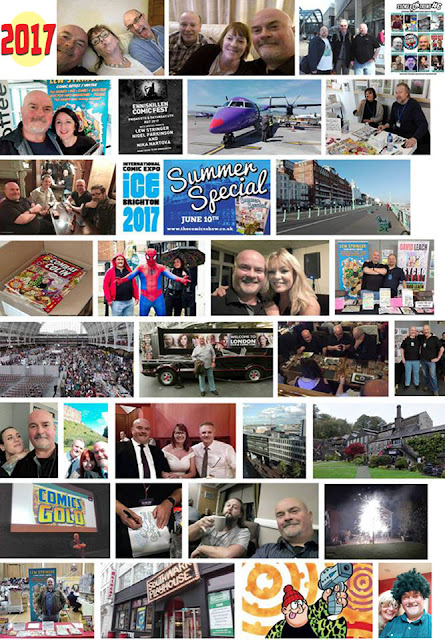 2017 was a good year for me. Work was steady, producing strips for Beano, Toxic, Epic, Doctor Who Magazine and The Dandy Annual. I also finally self-published Combat Colin No.1, the first in a series of comics collecting the classic strips. I was fortunate to be invited as a guest to a lot of conventions and attended 12 in all, in various locations across the UK.

It really has been a boost to attend so many events and meet readers past and present. It's also been great to see old friends from the comics industry, and to meet new people too!

Closer to home, it's been brilliant to hang out with my friends and have a good laugh, and to catch up with friends I hadn't seen in years.

As you can see from the photo compilation above, 2017 was full of laughs, travel, and friendship, and I'm always grateful for that. I never make long-term plans as that can lead to disappointment and stress, so I take things as they come and hope for the best. Hopefully 2018 will bring more of the same and some nice surprises too.

I know that this year has involved losses for some of you but, take it from me, even though it's a cliché, time is a great healer. The grief never completely disappears, and can come crashing back some days, but it happens less over time and the comfort from the company of friends can bring peace of mind. I wish you all good health and happiness for 2018. Onwards and upwards! 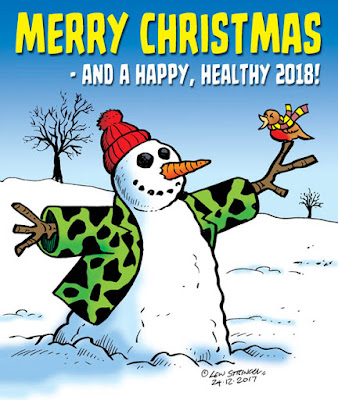 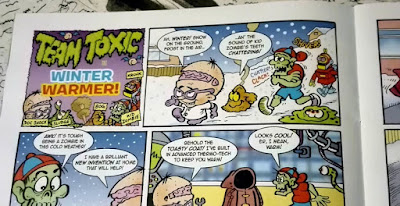 Toxic No.299 is in the shops now, and features another two-page Team Toxic story I did. Winter Warmer sees Doc Shock invent the Toasty Coat to keep Kid Zombie warm, but it all goes pear shaped!

Dash up to your newsagent to buy the latest issue now! 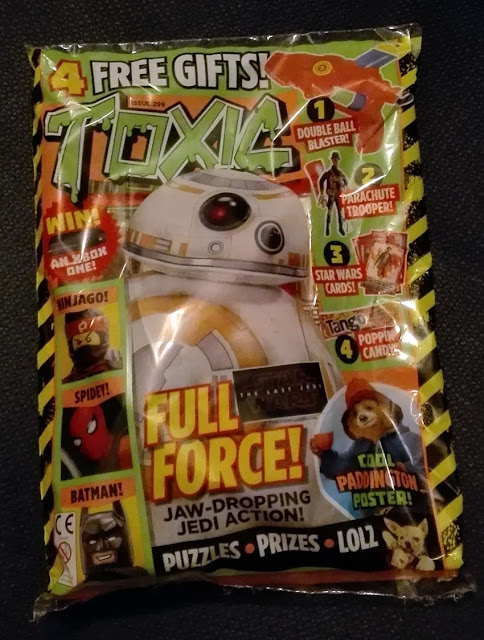 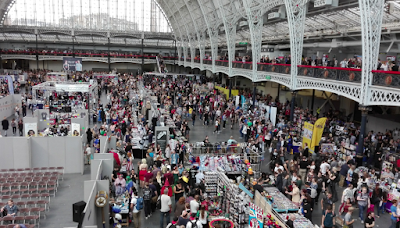 Sheffield, Stoke-On-Trent, Enniskillen, Brighton, Birmingham, Macclesfield, London, Birmingham again, Preston, Kendal, Loughborough, Reading. I've enjoyed travelling around the UK as a guest at various comics events this year, and I'm looking forward to doing more of the same next year! My thanks to everyone who stopped by my tables in 2017.

In 2018 I'll be visiting places I haven't been to before, plus revisiting favourite conventions again. If you run an event and would like to invite me as a guest, contact me at lew.stringer@BTopenworld.com with the details.

So far, I'm scheduled to be at four shows next year, but I'll add more dates as and when. Hope to see you in 2018!

CONVENTION APPEARANCES SO FAR FOR 2018:

Posted by Lew Stringer at 11:59 No comments: 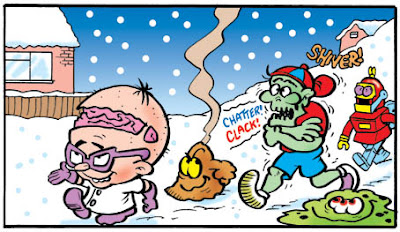 The Christmas issue of Toxic is in the shops now (see preview here), but next Wednesday the next issue will be out before Christmas Day. Such are the ways of publishing. As Toxic has a three-week schedule, it made sense for the one that came out on November 29th to be the festive one. If the Christmas ish had been the following one, it'd mean it'd still be in the shops for two weeks after Christmas, making it irrelevant.

Anyway, to make sure it's still seasonal, the new issue will feature a winter theme and plenty of snow in the Team Toxic strip, (see panel above), so consider it a Christmas strip without Christmas if you wish!

Toxic No.299 goes on sale on Wednesday 20th December for three weeks.
Posted by Lew Stringer at 17:19 No comments:

Email ThisBlogThis!Share to TwitterShare to FacebookShare to Pinterest
Labels: Toxic 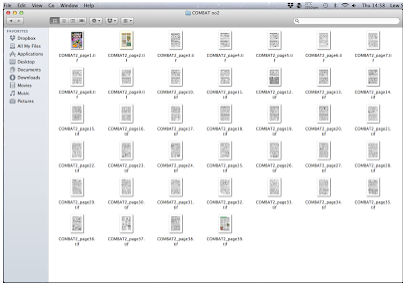 Yes, it looks like the most boring screenshot in the world, but what it represents is the near-completed pages for Combat Colin No.2. I'll be tinkering with some pages a little more over the weekend, then sending the files off to the printer next week for publication in January.

On New Years Day I'll be posting an exclusive preview of the issue right here!
Posted by Lew Stringer at 15:04 3 comments: 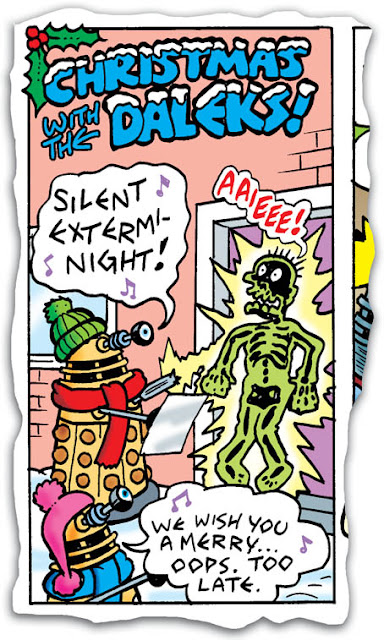 After seeing the Daleks for the first time in 1964 when I was four, I'd draw them everywhere in wax crayon. I never envisaged that I'd be drawing them for the official Doctor Who Magazine in the 21st Century, so it's a privilege to unleash my versions of the Skaro pepperpots in The Daft Dimension. This month, they're up to Christmas hi-jinks, as you can see from the exclusive panel above.

See the full Daft Dimension strip in the festive issue of Doctor Who Magazine, on sale from Thursday 13th December! 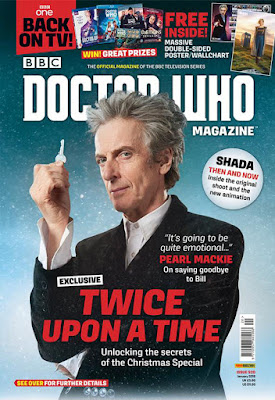 Posted by Lew Stringer at 10:49 No comments:

Email ThisBlogThis!Share to TwitterShare to FacebookShare to Pinterest
Labels: Daleks, Doctor Who Magazine, The Daft Dimension 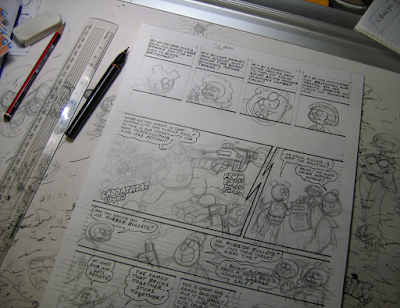 Here's a photo I took in 2007 while I was inking a Brickman page for Elephantmen, published by Image Comics in the USA. As you can see, it co-starred Combat Colin!

A few years ago, I collected all of those pages I did for Image, and published them in a comic; Brickman Returns! You can order it from my online shop here:
http://www.lewstringer.com/page7.htm
Posted by Lew Stringer at 08:30 2 comments:

Here's a photo I took ten years ago, in 2007, when I was working on the Team Toxic pages for the Christmas issue of Toxic for that year.

I've used various tools for inking over the years. Most of my work in the 1980s and 1990s was inked with Rotring pens. By 2007, (can't recall when exactly) I'd switched to using dip nibs, as shown in this photo.

I've also used uniPin Fine Line fibre tip pens (and still do, for lettering and for more intricate detail) but mostly now I use Zig Cartoonist Mangaka Felexible pens, which are kind of like brush pens.
Posted by Lew Stringer at 14:21 2 comments:

Have an EPIC Christmas! 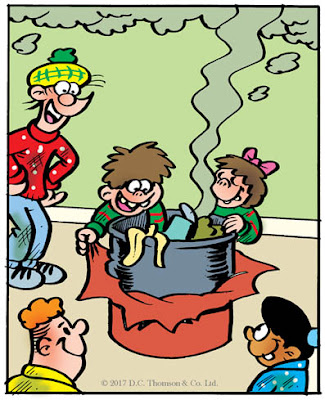 The Christmas issue of D.C. Thomson's Epic magazine monthly is out today, and it includes another two page Hygiene High strip by me, written by Niall Murray. It's Christmas present time in the classroom with the world's stinkiest schoolkids! 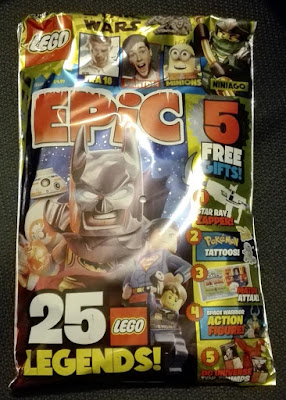 Posted by Lew Stringer at 19:49 No comments:

I had hoped to publish Combat Colin No.2 by early November, but being busy on mainstream comics work meant that ship has sailed. The comic is complete, except for the cover art, which I'll be finishing off later this week. To avoid any delays/losses with Christmas post, I'll now be publishing Combat Colin No.2 in January 2018. I hope the delay isn't too much of a disappointment. Issue 2 will be packed with around 70 Combat Colin strips from the period when it joined The Transformers as a half page strip in 1988 through to 1989.

The plan is then to publish issue 3 in late March or April, and issue 4 sometime next summer. I'm still planning to stick to the schedule of 2 or 3 issues a year. 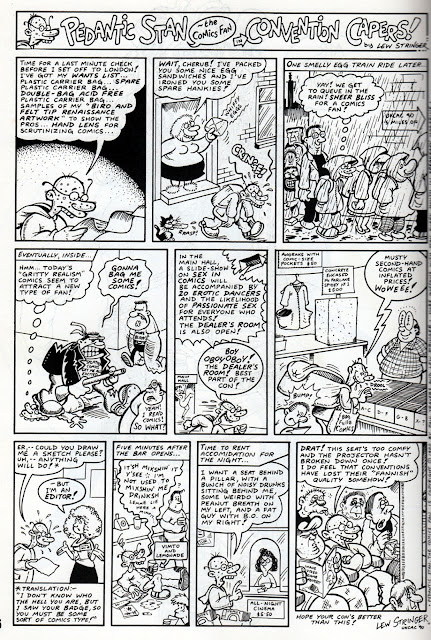 Back in the late 1980s I worked with John Freeman on a strip called Pedantic Stan, the Comics Fan for Speakeasy fanzine. John came up with the character, and had originally called him Captain Pedant, but I felt that Pedantic Stan suited him better so we agreed to call him that. John wrote the scripts, and I drew it. The strip didn't run for long, but I think it'll be due a revival one day soon.

The page above was created for the UKCAC 1990 convention booklet. For this one, I did the script as well as the art. This was set in the days when comic cons were dominated by lads with rucksacks full of comics. Times have changed for the better!

Hopefully next year, when I've found all the original strips, I'll self-publish a little comic collecting them all along with other bits and bobs. Watch this space!
Posted by Lew Stringer at 17:20 No comments: 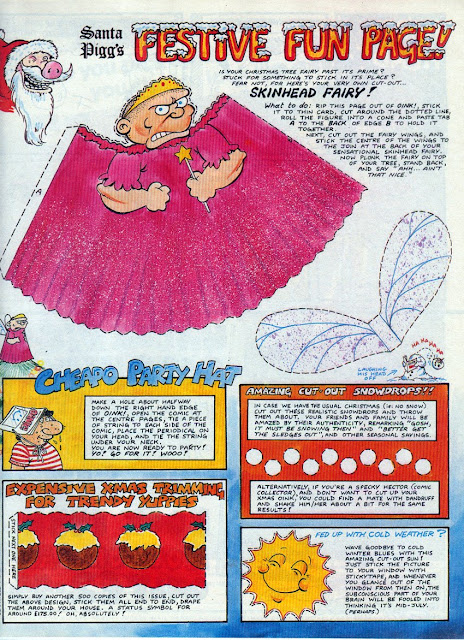 It's that time of the year to put the Tom Thug Skinhead Fairy atop the Christmas tree again! What's that? You don't have one? Well, you do now, with this handy page I did for Oink! comic back in 1987, 30 years ago!

Simply print out the page, glue it to card, and follow the instructions. You could have Tom Thug in a pink frock glaring at you from the top of your tree in no time!

Posted by Lew Stringer at 00:14 No comments: