Tom Thug and Doctor Who art in auction 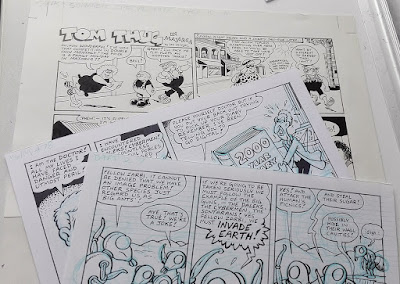 Only a few days to go on this week's auction of my original artwork.

You can bid on a Tom Thug page from the 1988 Oink! Summer Special at this link:

...a very early Daft Dimension (actually the second one I did) from Doctor Who Magazine at this link:

...and another Daft Dimension, this time featuring the Zarbi, at this link:

You can see more photos of each item in close up at those links.

Posted by Lew Stringer at 15:59 No comments: 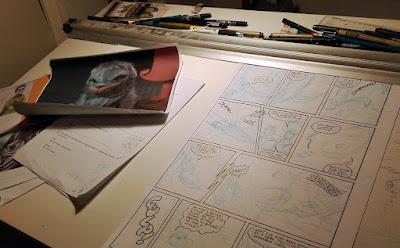 This time last year I was drawing the Oink the Seal page for the Stingray Comic Special! The comic was one of the items that was part of the Stingray Deluxe Limited Edition Box Set produced by Network.

It made a nice change to draw something different like this, especially as Stingray was one of my favourite TV shows as a child. 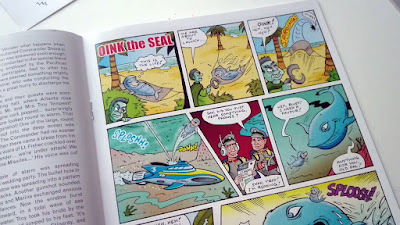 The box set is still available and can be bought from The Official Gerry Anderson Store at this link:

Posted by Lew Stringer at 14:21 No comments:

What's Happening to the TARDIS? 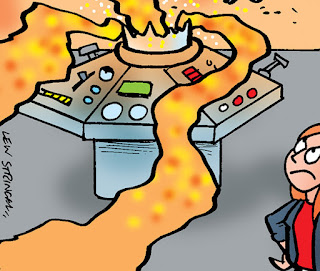 Here's a tiny clip of part of my next Daft Dimension strip. What's going on? How did the TARDIS console get damaged? Whyyyy? etc.

Find out in Doctor Who Magazine No.587 when it goes on sale this Thursday, 2nd February!

Available from all good newsagents, WH Smith, some supermarkets and comic shops... or directly from the publisher at this link: 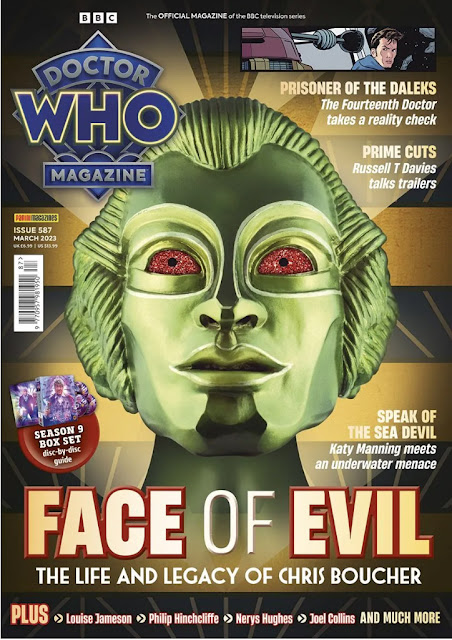 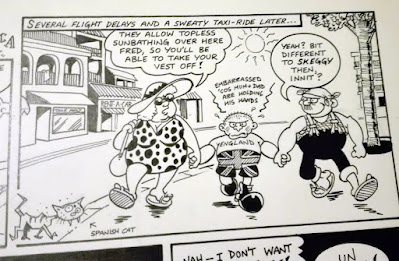 This week I'm selling more of my original artwork. There's a full page Tom Thug strip, Tom Thug in Majorca, that was published in the Oink! Summer Special 1988, plus two early Daft Dimension strips from Doctor Who Magazine. 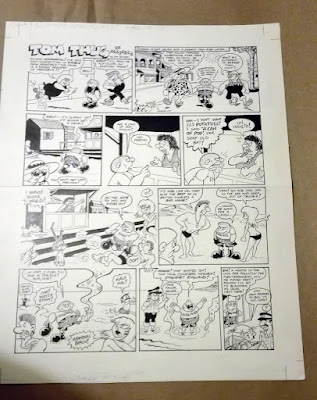 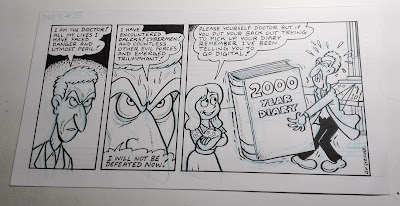 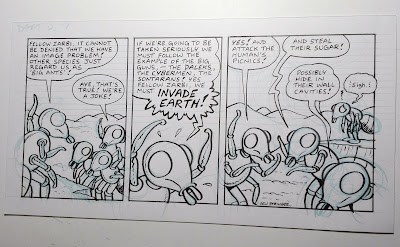 The auctions run until Sunday 5th February. See the following link for close up photos of each item:

Good luck with your bids!

Posted by Lew Stringer at 22:45 No comments: 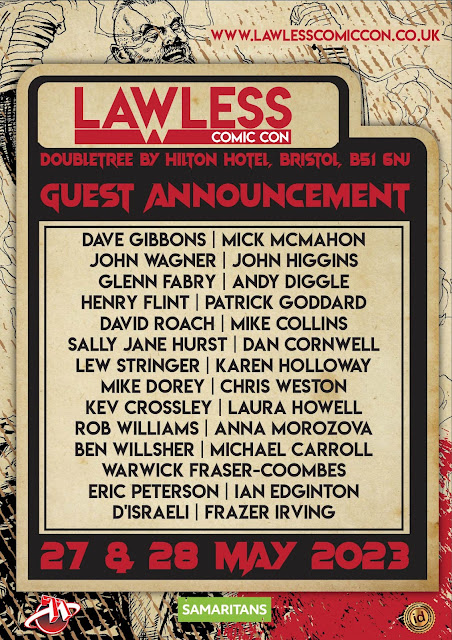 Lawless Comic Con have expanded their guest list, adding Laura Howell, Michael Carroll, Ian Edginton, and D'Israeli and tickets are on sale NOW from their convention website at:

Hope to see some of you there!

Posted by Lew Stringer at 19:06 No comments:

Pete and his Pimple, guest scripted by Charlie Brooker 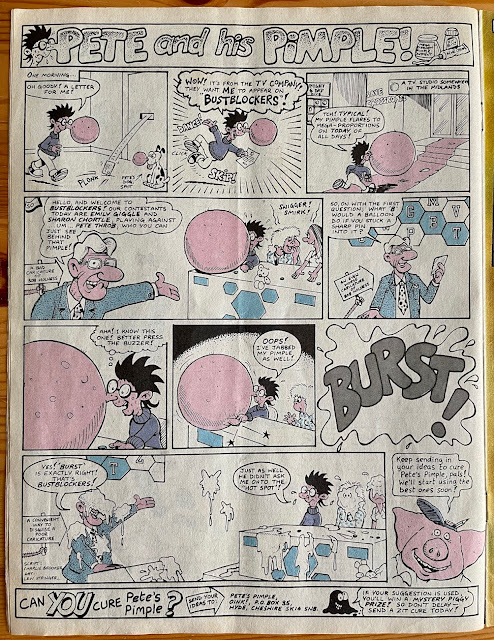 I usually wrote my own material for Oink! comic but back in 1987 Charlie Brooker supplied a very funny script for an episode of Pete and his Pimple that was a pleasure to draw.

Charlie was the youngest contributor to Oink! and only 15 or 16 at the time but he was delivering the laughs even then. He also drew strips himself for the comic and had a nice cartooning style.

Charlie later moved on to work in television of course, being responsible for shows such as Screen Wipe and Black Mirror. I wish he'd done more comic strips, but the comic industry's loss was television's gain.

Thanks to Oink! Blogger Phil Boyce for reminding me of the time that Charlie Brooker and I collaborated on a page. You can read more about this issue of Oink! over on Phil's blog at this link:

Email ThisBlogThis!Share to TwitterShare to FacebookShare to Pinterest
Labels: Charlie Brooker, Oink, Pete and his Pimple 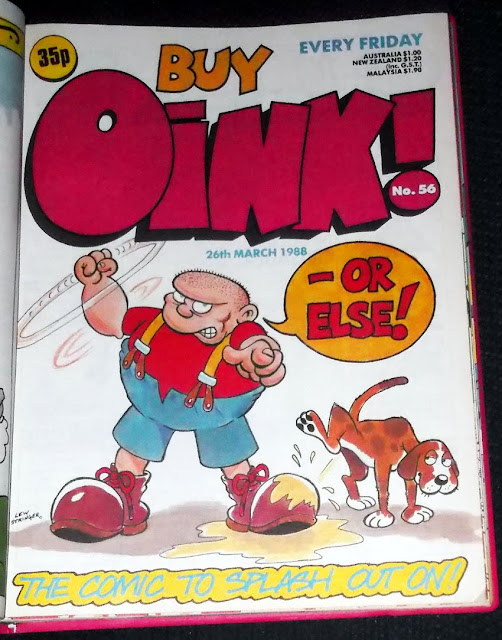 One of the Oink! covers I drew/designed featuring Tom Thug. I was always sure to make Tom look foolish in his attempts to be threatening. That was the whole point of the character of course; he's 100% the bad guy, never a hero. A character for kids to laugh AT, not with.

In real life bullies often get away with it unfortunately, but I wanted to create a strip where the villain got his just deserts every week. My hope was that it'd provide some catharsis for readers who were victims of bullying; a chance to laugh at the morons who commit such cowardly deeds. Tom Thug proved to be very popular in Oink! and in Buster so maybe it worked. The strip ran for ten years and another four years as a reprint.

Would the strip work today? I dunno. Schools clamp down on bullying quicker now so there'd be less potential to tell such stories. Publishers also get a bit nervous now of showing characters being too aggressive, or the consequences of the violence backfiring on kids. Strips would often end with Tom looking bruised and battered, purple lumps protruding from his head (a visual exaggeration I'd taken from Ken Reid's work) but it might not be acceptable in a kids' comic today.

Who knows? As far as I know there's no sign of Tom Thug ever returning. If Rebellion did bring him back I hope I'd be given first refusal to write and draw new stories considering I created him. Perhaps we could do it for older readers, with Tom aged up, as was the scenario in the last few issues of Oink! before it merged into Buster and Tom reverted to a schoolboy again. Time will tell, but at the moment it's all speculation.

Posted by Lew Stringer at 14:09 No comments: