I designed a new banner for myself recently for use at conventions. My previous one just used a blow up of the Brickman Returns! cover but I thought it'd be better to show a selection of my characters. Combat Colin is the most prominent as that's the one most people seem to remember best. I thought I'd include Tom Thug and Pete and his Pimple too as a lot of people I meet remember those as well.

Most comic creators have their own banners now as they help attendees recognize the guests across a crowded convention hall. They also add colour to the event and give the show a more professional look I think.

The next event I'll be at will be Nottingham Comic Con on Saturday 29th October so if you're attending look out for my banner!
http://www.nottinghamcomiccon.co.uk/
Posted by Lew Stringer at 20:01 2 comments: 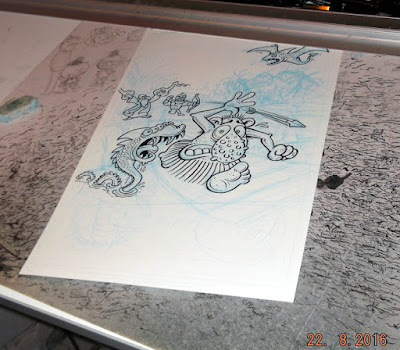 Here's a photo I thought you might like to see that I took a few weeks ago when I was inking the cover to Derek the Troll. As you can see, it was only partially completed at that stage. When the inks were finished I scanned the art into Photoshop to colour it and add the logo etc. (I designed the logo using a Comicraft font called KillZone. http://www.comicbookfonts.com/ )

Here's how the published comic looks... 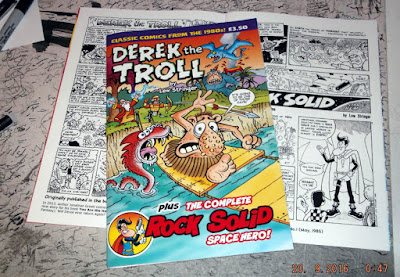 Sales are going well on Derek the Troll so far. If you'd like a copy you can order a signed copy directly from me at my online shop and I'll post it out to you:
http://www.lewstringer.com/page7.htm

Remember, you won't find independent comics like these in newsagents. The UK comics industry these days often uses other ways to survive, such as comic shop sales, conventions, and mail order. If you're a fan of British comics, please show your support. Thanks.
Posted by Lew Stringer at 00:51 No comments: 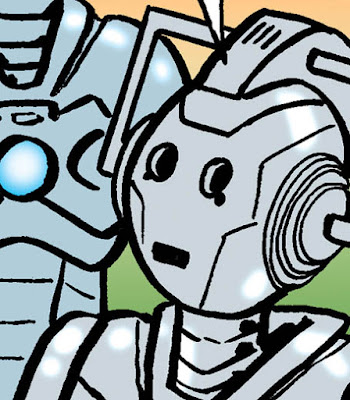 In this month's Daft Dimension strip I was given the opportunity to feature the Cybermen as it ties in with the main focus of the issue, which is to celebrate the 50th anniversary of the characters. You'll see the full strip in Doctor Who Magazine No.504, on sale Thursday 22nd September. That issue comes with a choice of four covers. Which one will you get? 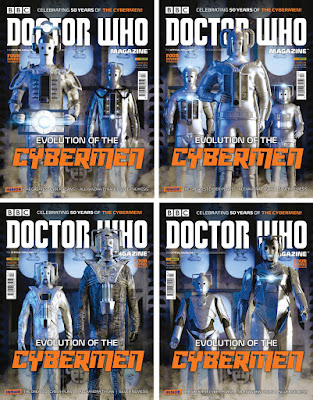 Posted by Lew Stringer at 00:34 No comments:

End of the Parade 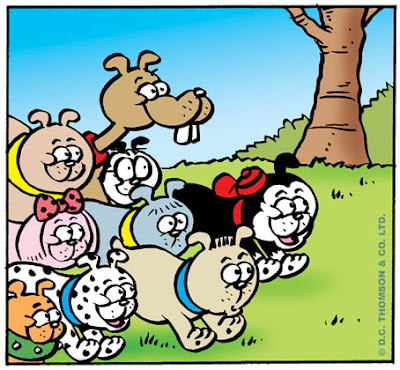 Here's a preview panel from this week's Pup Parade... although it won't actually be called Pup Parade! You'll find out why in The Beano when it goes on sale on Wednesday (or before, if you're a subscriber). Although I usually write the strip, this one was written by someone else as it ties in with a theme running through the comic.

Sadly, this will be my last page for The Beano for the forseeable future. This issue will also be a "big news" edition, which will lead into a relaunch for the comic the following week. As I'm not part of that revamp I have no idea what it entails but I'm sure all the core characters will remain and there'll be new ones too! I've heard it's going to be great, so Never Be Without A Beano!

There are a couple of unpublished Pup Parades that might appear in 2017 or in the 2018 annual. I've also illustrated a four page story (not Pup Parade though) for The Beano Christmas Special, so that will be out later this year. Other than that, I don't know when I'll be back in The Beano. Such is the roller-coaster life of a freelancer. I should be used to it by now.

In the meantime you'll still find me doing Team Toxic in the top selling Toxic and The Daft Dimension in Doctor Who Magazine, and hopefully more stuff for other comics / mags in the months to come. (No idea what as yet though, so that's not a clue.)

My thanks to all of you who have said at conventions and on social media how much you enjoyed my Pup Parade pages. It's been a pleasure to work on a strip I used to enjoy so much as a kid. (I'm so old I remember when they first appeared in The Beano back in the 1960s!) Your warm comments have been much appreciated.

Onwards and upwards!
Posted by Lew Stringer at 16:53 1 comment:

Team Toxic become superheroes in the current issue of Toxic magazine! How? Why? Buy the mag and find out in Hero Hour in Toxic No.277, out now!
Posted by Lew Stringer at 18:37 No comments:

ICE2016 was a great show! I sold out of all the issues of Derek the Troll I took with me and I was busy sketching all day too. You can read more about the event in my review of it over on my Blimey! blog here:
http://lewstringer.blogspot.co.uk/2016/09/ice-2016-jolly-good-show.html

Posted by Lew Stringer at 18:34 No comments:

DEREK THE TROLL launches this Saturday! 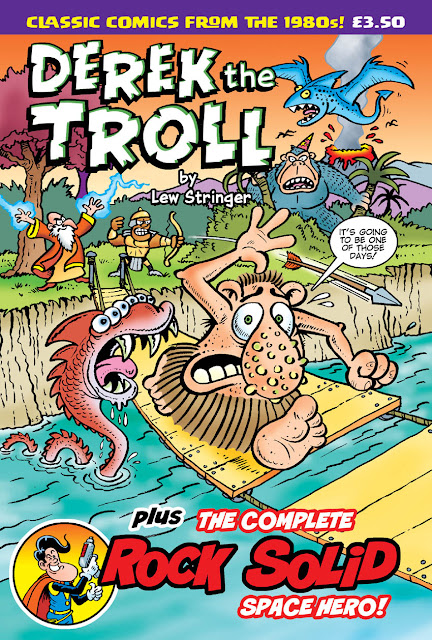 Here's my new comic that I've been hinting at for weeks. Hot off the presses, Derek the Troll will launch at the ICE 2016 comics convention this Saturday, 10th September, in Birmingham.

Derek the Troll is a 32 page one-shot collecting every Derek the Troll strip I did for Warlock and White Dwarf magazine from 1985 to 1987. Derek is the affable but stinky denizen of a time before history, encountering angry villagers, mad barbarians, and sneaky warlocks. 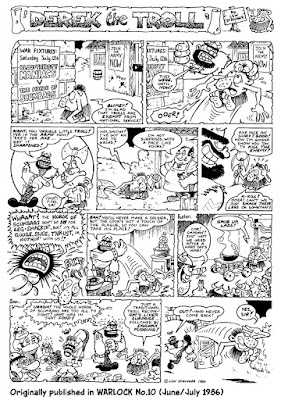 The second half of the comic features Rock Solid, Space Hero, a serial I did for Harrier Comics' Swiftsure way back in 1985 and never reprinted before. Rock thinks he's the greatest hero in the galaxy, but in fact he's nothing but a space-faring psychopath. But when Earth is invaded, he's the best hope we have! Will humanity survive? The complete 15 page saga is collected in this comic. 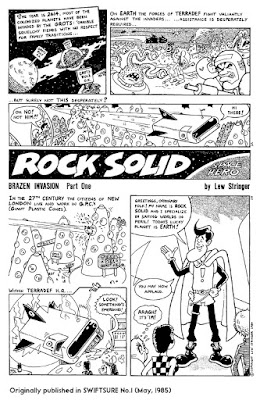 Derek the Troll and Rock Solid are some of the earliest strips I had published, right back in the early years of my career and you can see my style develop with each episode. I'm still pleased with how they hold up and anyone who enjoyed my Combat Colin and Oink! strips will hopefully get a kick out of them.

Speaking of Combat Colin, I've also included a couple of half-pagers from the late 1980s as a bonus back-up feature.

Derek the Troll is a 32 page comic including 28 interior pages in their original black and white. If you can't make it to ICE 2016 for the launch, you can order a copy from my online shop and I'll post it out next week.
http://www.lewstringer.com/page7.htm
Posted by Lew Stringer at 13:07 No comments: 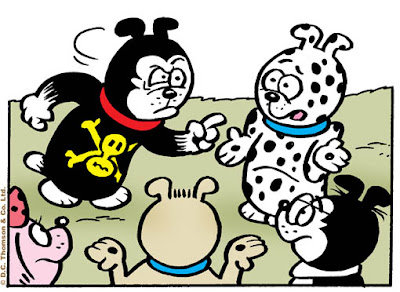 Here's a couple of panels from this week's Pup Parade page. Bones, the leader of the Bash Street Dogs, has lost his hat! Accusing paws are pointing, but who's had it? Find out in The Beano, on sale Wednesday 7th September! 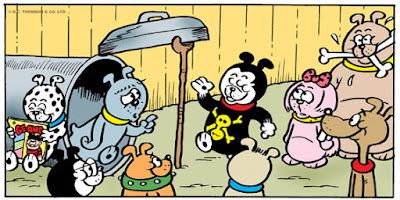 Posted by Lew Stringer at 18:03 No comments: 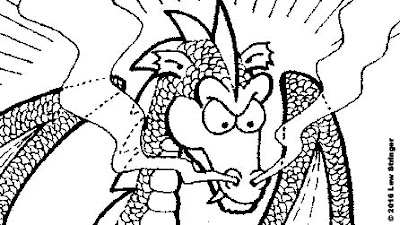 Posted by Lew Stringer at 21:35 No comments: 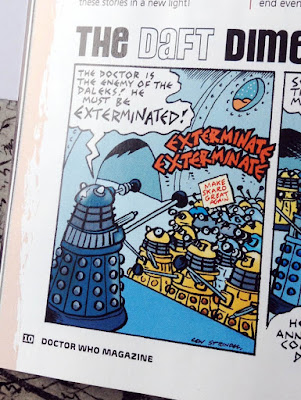 The latest issue of Doctor Who Magazine (No.503) is still available in the shops for the next three weeks and features another of my Daft Dimension strips. This month, focusing on Daft Daleks!
http://doctorwhomagazine.com/
Posted by Lew Stringer at 13:32 No comments: 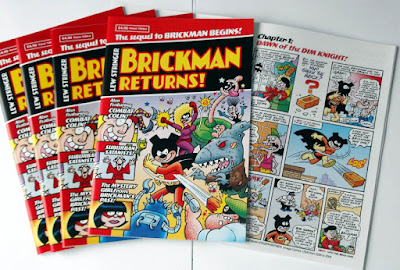 Top Beano artist Nigel Parkinson will be selling copies of my Brickman Returns comic at the Bournemouth Film and Comic Con this weekend! He'll be doing Dennis the Menace sketches for anyone who wants one too of course, ably assisted by Beano colourist Nika Nartova, so drop by his table!

The following weekend, I'll be at the International Comic Expo (ICE 2016) in Birmingham, and I'll have Brickman comics with me of course, plus... hopefully... my new comic too, fresh from the printers. More news soon!
Posted by Lew Stringer at 16:42 No comments: