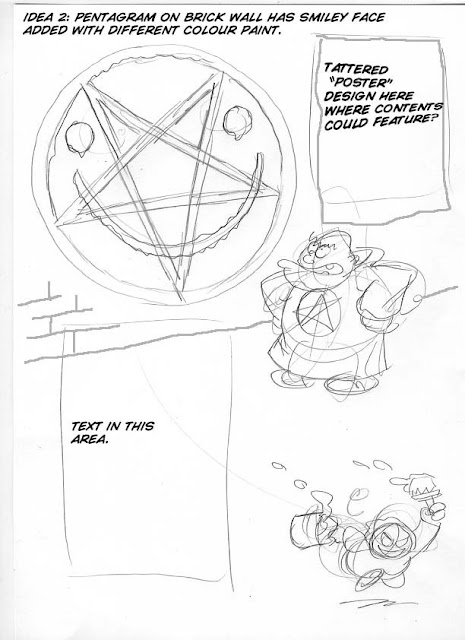 Back in 2005 I was asked by Nemi creator Lise Myhre to design a contents page for the next issue of her monthly Nemi comic in Norway. (Different guest artists did a page every issue.) As my Suburban Satanists strip was appearing over there in Herman Hedning comic at the time it made sense for me to use a couple of them in the contents page art.

Above is the idea I roughed out, and below is the finished artwork. Text was dropped into the blank areas and the page was coloured over in Norway. 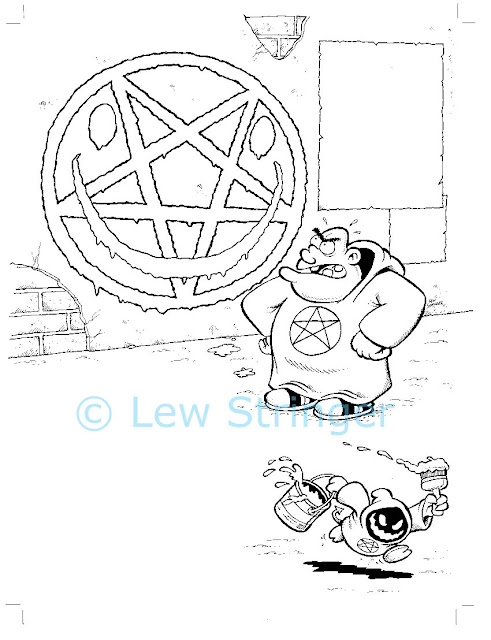 That was my only contribution to Nemi comic but it was fun to do and an honour to be part of it. I'm pleased to say that Nemi is still going, and reached issue 150 this month. (Thanks again for sending me a copy, Lise!)

As for the Suburban Satanists, it's their 20th anniversary in 2017 so I'm planning to publish them in their own UK comic next year! News as to when exactly that'll happen will be revealed on this blog!
Posted by Lew Stringer at 13:55 4 comments:

"They're leaving, on a jet plane. Don't know when they'll be back again..." 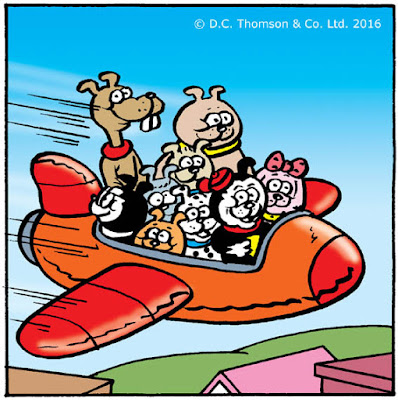 Here's a preview of the next Pup Parade, in The Beano this Wednesday. Sadly, I've just heard that the strip will be ending next month. I've really enjoyed working on it, and for The Beano, and I'd like to thank you all for supporting and following it. It's meant a great deal to me when readers of all ages have told me how much they've enjoyed Pup Parade but nothing lasts forever in life. If I'm commissioned to do any new material for the comic you'll hear about it on this blog. Until, then, I hope you enjoy the few episodes of the strip that remain, and Never Be Without A Beano!
Posted by Lew Stringer at 15:33 2 comments:

Bash Street Dogs on the pitch! 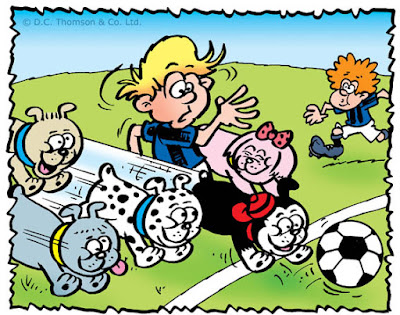 Remember when you'd be playing football in the school field and suddenly a stray dog would run on the pitch? In this week's Beano all nine of The Bash Street Dogs invade the pitch during a game played by Ball Boy and his team. see the full story in Pup Parade in The Beano No.3849, out now for only £2.50! 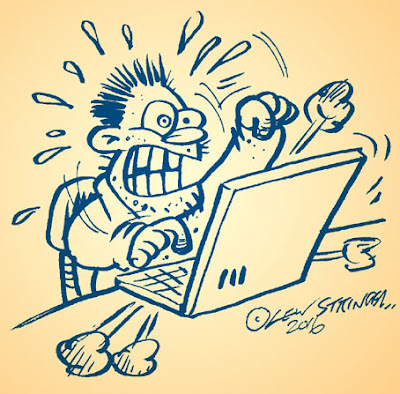 Apparently it's 25 years today since the World Wide Web became available for public use. Blimey! There's no denying that it's a fantastic resource for information and a boon for sending work directly to publishers or whoever. It's also been great for social media. (I know a few people who have even met their true loves online.)

It has a darker aspect too of course. From the extreme sickness of sites dealing in sexual abuse or violent radicalization to the lesser evils of 'trolls' bullying and hassling people or spreading malicious distortions.


Even in mild cases, the 'net can have its problems. The mistake many of us make is that we sometimes assume that someone we're having a debate with online is a rational person. Then, as the discussion becomes more convoluted and the other person is prolonging the argument by nitpicking every perceived flaw, or throwing in opinions as if they were hard facts, the alarm bells start ringing. If you find yourselves in that sort of situation, back away from the computer! You're either dealing with someone with 'issues' or a time-waster. Either way, they have more time on their hands than you, and you'd probably see why if you met them. The thing with the 'net is it puts everyone on a level playing field. That's great in normal situations, and can give shy people confidence for example, but in the case of the sociopaths it provides a shield they can use to a brutal advantage.

It took me a long time to realize that, but these days I try to keep clear of such people. If I see the conversation being manipulated like that I just walk away. And that's the beauty of the 'net. You can just switch it off. Ok, the crazies might still be banging on and telling tales in your absence, and that stuff is online indefinitely, but from my experience anyone with a glimmer of intelligence sees right through them anyway.

So, happy anniversary, Internet! Let's focus on the positives....
Posted by Lew Stringer at 21:46 7 comments:

I completed the work on my new self-published comic today and sent the pages to the printer a short time ago via the wonder of cyberspace. It's a 32 page comic that collects some of my earliest published work. Hopefully it'll be printed in a couple of weeks in time to launch at ICE, the International Comic Expo in Birmingham.

More news about it soon!
Posted by Lew Stringer at 19:33 No comments:

Sneak preview of my new comic 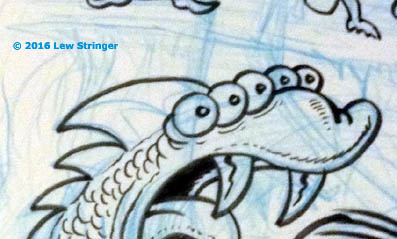 I'm currently working on the cover of my new comic, which collects some very old material of mine from 30 years ago. I'm hoping to have it published in time for ICE 2016 next month. Here's a preview of the work in progress. Well, a tiny fraction of the cover that is. I added a couple of extra teeth to it after I took this shot.

Most of the comic is now complete, with only the cover to finish and the intro page to write. Watch this space for more details soon!
Posted by Lew Stringer at 12:04 No comments:

Email ThisBlogThis!Share to TwitterShare to FacebookShare to Pinterest
Labels: Lewniverse 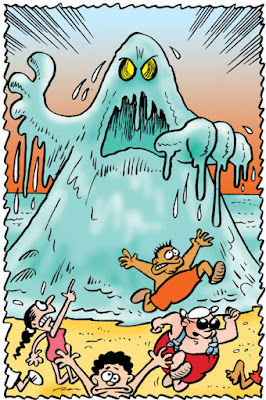 Here's a quick preview of the strips I have in print this week, in two titles out today. Firstly, Team Toxic encounter Weirdness on the Beach in Toxic No.276. As our summer comes to a close, and you're having a day at the beach, what better way to enjoy it than to read a strip that's actually set on a beach? 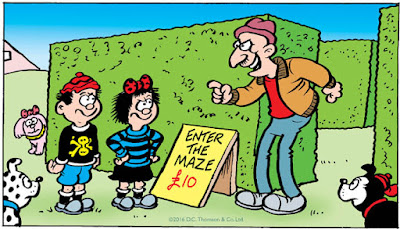 Over in The Beano, a couple of the Bash Street Kids make a cameo appearance in Pup Parade this week. Those of you I met at the Shrewsbury Comic Art Festival last month may remember that this was the page I was penciling there, in-between doing sketches. 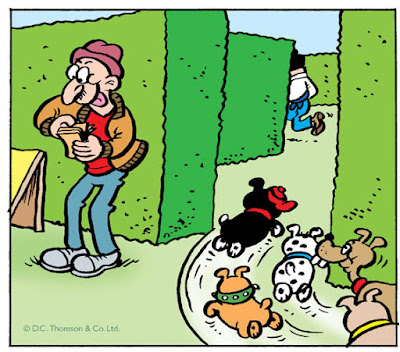 Posted by Lew Stringer at 21:19 No comments:

Sniffy on the prowl 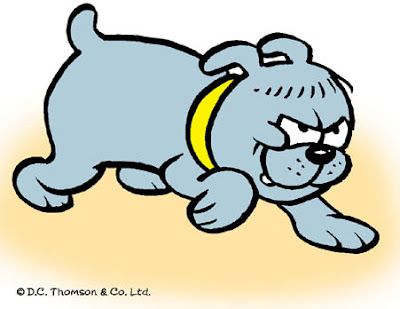 Here's a preview panel from this week's Beano, where Bash Street Dog Sniffy decides he wants to be a cat! (This is the one I thought was going to be in last week's issue if it sounds familiar.) See the full story in Pup Parade in The Beano, out now from all good newsagents, supermarkets, mini-markets, and airport / railway bookshops!
Posted by Lew Stringer at 21:47 No comments:

Ten down, one to go!

I've really enjoyed traveling around the country (and over to Northern Ireland) for various conventions this year. The Bristol Comic Expo was great on Saturday, and my next one will be ICE 2016 (International Comic Expo) on September 6th in Birmingham.
https://internationlcomicexpo.wordpress.com/

That'll be 11 shows I've done this year. I've nothing planned after September but I'm always open to offers!
Posted by Lew Stringer at 00:34 No comments: 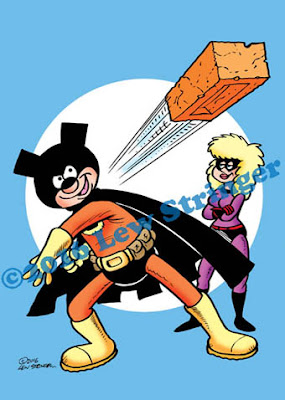 Delivered from the printers this morning, brand new Brickman and Trowel mini-prints. These full colour prints can either be added to your collection or used as postcards, along with the other two cards in the series, Combat Colin and Derek the Troll.

They'll be available from my table at the Bristol Comic Expo this Saturday, 6th August, alongside my other prints, The 7 Ages of Fan (A4 size), the A5 size Character Data Card, and of course, copies of my Brickman comics. See you there! 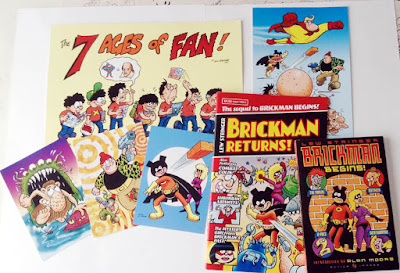 This week's Beano sees Blotty of the Bash Street Dogs dreaming about Star Wars... or rather Bone Wars! See the full story in Pup Parade in The Beano No.3846, out now!

This week's issue is a special one, in a card package with great gifts! Find out more info about it on my Blimey! blog here:
http://lewstringer.blogspot.co.uk/2016/08/extra-special-beano-this-week.html
Posted by Lew Stringer at 22:41 No comments: 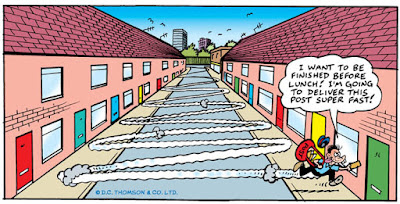 The Dandy Annual 2017 is out now! There are three Postman Prat stories in there I've done (two written by David Mason), plus five mini-strips each for Kid Cops and The Smasher. There's also loads of new material by other cartoonists too of course, and you can read my review of the book over on my other blog here:
http://lewstringer.blogspot.co.uk/2016/08/the-new-dandy-annual-is-here.html
Posted by Lew Stringer at 12:17 No comments: