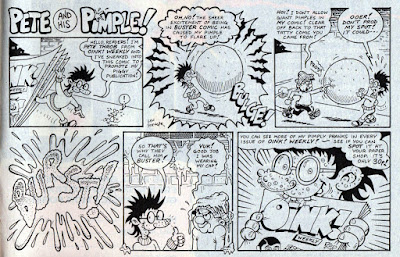 Buster issue dated 26th March 1988 featured a half page Pete and his Pimple strip I was commissioned to do, to promote Oink! comic, which makes this my first Buster strip.  Not only did they let a then-relative-newcomer like me loose in the pages of this fine, well established comic but I even got to co-star Buster himself in the story, - although as you can see, it didn't end well for him!

As most comic readers of the time know, the promotion sadly had little effect on Oink's falling sales (no thanks to WH Smith top-shelving it well away from other comics) and Oink! actually merged into Buster later that same year, bringing Pete and his Pimple into the comic on a regular basis.

Interestingly, although I was able to do a full on gross strip for the advert above, editor Allen Cummings didn't want any pimple pus bursts seen in the regular Pete and his Pimple strip when it became a fixture in Buster. I think it took the edge off the strip but I completely agreed with Allen's point as such gross humour was fine for Oink! but not suited to the tone of Buster.

As it turned out, Pete only had a run of six months or so in Buster. Whilst Oink's older readers had voted it one of their favourites, Buster's younger audience didn't really go for it. (Well, what seven year old can relate to zits?)

On the other hand, Tom Thug, which had also transferred from Oink, shot up the Buster popularity charts, as you can see from this letter I received from the editor. I guess kids of all ages always like to see the bully become the butt of the jokes, and long may it be so. 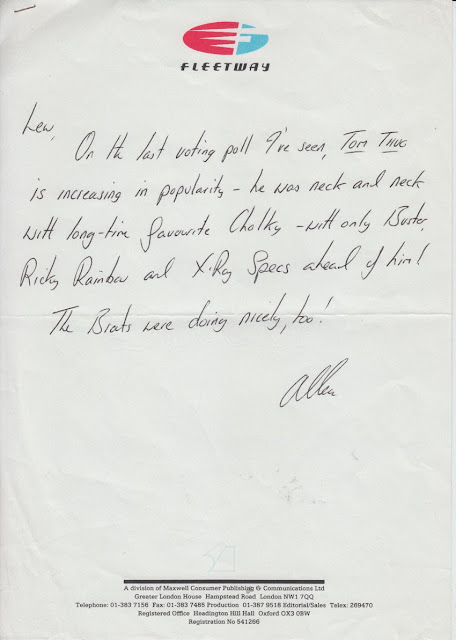 Email ThisBlogThis!Share to TwitterShare to FacebookShare to Pinterest
Labels: Buster, Pete and his Pimple

Gosh. I remember this so well. It was quite the debut!

nice strip, I like the fact you have Buster moaning about not wanting the pimple stuff in his comic, and when the strip moved the Buster, the editor carried on the thread ^_^

though as Oink was aimed at a older group... I'm not sure how well it would have worked, unless trying to catch kids who were feeling that they started to outgrow Buster.. of course, hind sight kinda says it didn't work but still.

Oink! had been promoted in the other comics since it began, so there wasn't that much of an age difference in the demographic. Pimples might not have been relateable for Buster's audience but the main reason for toning it down was that Buster was a more conservative comic than Oink! I got away with it for the advert as it had to reflect Oink's more modern style of humour, but as soon as Pete and Tom became proper Buster characters they had to fall in line with the rest of the comic. I still had fun though, and working for Buster was a pleasure.

fair enought ^_^ also, I can imagine that change for Buster helped a bit with ideas. Running a long time strip, even if you are slightly lazy with the fact of reader turn around lets you repeat ideas, changing to even a slightly different format might have lead to some new ideas.. maybe..

Hopefully I've never repeated ideas, but if I did it was unintentional, not laziness. I wouldn't shortchange the readers like that. Yes, working for Buster meant a different, more traditional tone and pace for the strips.

Yes, It can be a bit of a shortchanging thing, but in many things, i guess mostly much older comics, it was done because after ten or so years, they expected different readers.. Back when comics were 'disposeable entertainment'. A bit like the old thing of renaming old strips for reprints as done by some back in the.. 60s and 70s? i don't think they really did it much after the end of the 70s..

Though at times, I don't mind, and can enjoy when the same setup is used but with a different outcome..

I really don't think repeating ideas has ever been done that often. Characters might revisit locations or get into similar situations but there's no intention to repeat ideas because it's a different audience. We all try to come up with fresh ideas all the time, which gets harder as time goes on because we're consciously aware we *don't* want to repeat what we've done before.