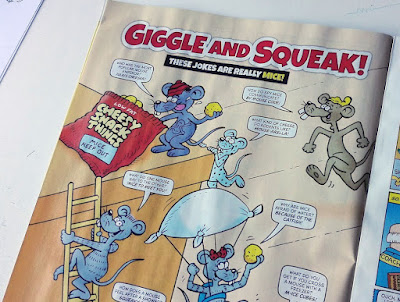 I was commissioned by the Beano to draw a joke page for this week's issue. The brief was to feature mice scurrying around the floor of the classroom and to make them resemble the Bash Street Kids. I thought I'd make them cheeky mice going after a bag of cheesy snacks that someone had left of their desk.

It was a fun page to draw. The Beano supplied the mouse-themed jokes they're saying. I hope there'll be more work for Beano in the future as I miss working for them. They'll be working on the Christmas issue now though so unfortunately it doesn't look like I'll be in the comic again until next year at the earliest.

Here's how my page looked during the inking stage on 21st August next to the script on which I'd scribbled a few character roughs. I completed the page the same day, coloured it in Photoshop, and emailed it to Beano HQ... 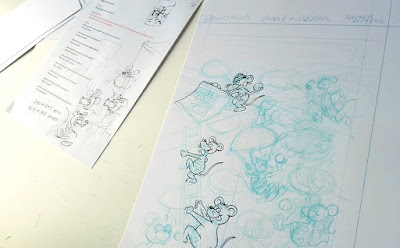 See the published version in Beano No.4157, in shops this Wednesday (12th October). 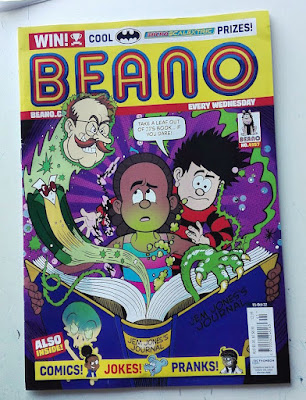 Email ThisBlogThis!Share to TwitterShare to FacebookShare to Pinterest
Labels: Beano

I like the visual reference with the Mice. That's almost always a good thing (i have seen the odd time it was a mistake but that's rare).

As for the Jokes... well.. interesting.. I searched online for mouse puns (they are puns more then jokes) and.. there was a list of 35 of them (well.. i think that ice cube one was missin).. and these are all there.. Guess there is a limited number of bad mouse puns.. erm.. what did the one blind mouse say to the other.. "Since we have poor eyeslight anyway, this isn't really a problem is it?".. okay.. that's really not funny or anything.. I think kids might be better off with other people's bad puns ^_^