Biffo is coming back! 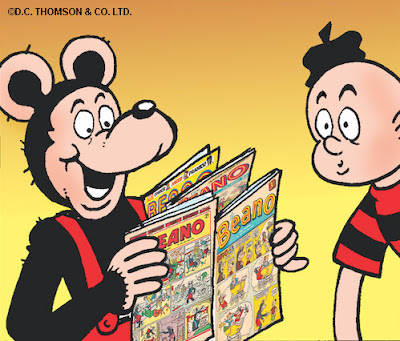 Here's a tiny preview of part of a panel from one of the Biffo the Bear strips I've done for Beano Annual 2023 which will be published this August.

I was asked to write and draw eight Biffo mini-strips in all and they'll appear throughout the book. It was fantastic to work on a character that was such a familiar part of my childhood. The iconic bear first appeared in The Beano in 1948, replacing Big Eggo as a cover star (Big Eggo being another character I've worked on, for the weekly Beano a few years ago).

Biffo is an interesting character to create stories for because he can do anything; gardener, plumber, clown, athlete... and they're just some of the topics I didn't use. As you can see, I've also revived Biffo's best pal, Buster, which means I've now drawn both the D.C. Thomson Buster and the Fleetway / Rebellion version. (No, they're not related.)

As I said above, Beano Annual 2023 will be out on August but you can pre-order it now from the publisher's webshop at this link:

Other artists drew him before you.

erm... yes.. tons other artists have drawn Biffo.. and Buster and others.. odd comment that..

anyway.. now.. you have done a few 'famous faces' in your time of real people.. so we need a Buster Keaton... I think you could do a good job on him ^_^

If Film Fun is ever revived maybe I will. :D