As you may recall, I set it up three years ago to sell various merchandise. Combat Colin T-shirts and mugs, Derek the Troll coasters, Brickman badges, etc. Redbubble assured me I'd still own the I.P. so all was good. 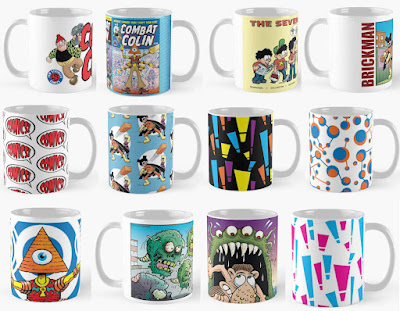 It seemed ideal. I just upload the art and Redbubble handle the rest; they deal with orders, manufacture the goods and dispatch them to customers. Prices were a bit high (Redbubble set the prices) but these were Print On Demand so were very rare items. The downside was that Redbubble take a huge percentage, but that seemed fair considering they were doing all the work after I'd uploaded the art. 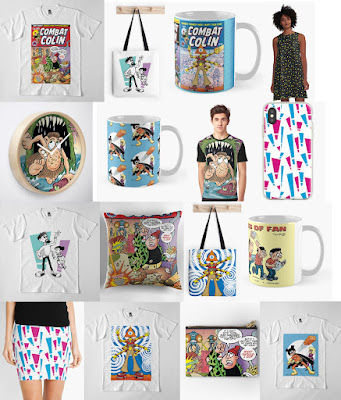 Sales have been pitiful though. "You should do merchandise" people told me. I did, but most of those people didn't buy any. Do you know how much I earned from it over the past 12 months? £5.19.

Okay... I thought I'd leave it a while longer... but tonight, I received notification from Redbubble that they'd removed my 'Seven Ages of Fan' artwork because it was already "related to a brand". Bloody cheek! That artwork was something I created in 1998 (originally published in the UKCAC booklet that year), and, like all my work on Redbubble, was an original creation and my Intellectual Property.

That was the last straw. I've deactivated my account.

My thanks to the few of you who did buy mugs, T-shirts, stickers, caps, etc from my store. Hang onto them. They're now very rare!

Update: I've just found a website of a U.S. company that has completely ripped off my mug designs without my permission. I'm not sure how they've acquired my art to use as I only uploaded those designs to Redbubble. If you see any websites manufacting Brickman, Derek the Troll, and Combat Colin merchandise it is 100% illegal. Action will be taken against them.

shame but yeah, Red bubble can be a little pricey (I did buy stuff but not alot) but you do get what you paid for. They deal with alot of the work and the products are a nice quality. But claiming the seven ages of fan was taken from a brand? ... even the minor part references to marvel isn't enough for that... The ripping off of your work is very bad.. Gives you a bit of work to have to deal with it too.. hope it gets sorted out though.

The scammers are based in Viet Nam, not the USA as their site says, so I doubt I'll get any resolution. I doubt anyone would receive anything even if they ordered the fake mugs.

Of little comfort, but I love the 'COMICS!' word balloon stickers you sold. One adorns the back of the tablet I read all my digital comics on (legally obtained, I should add - Comixology, Marvel Unlimited and Kickstarter rewards, etc).

Thanks for buying those stickers, Kal!