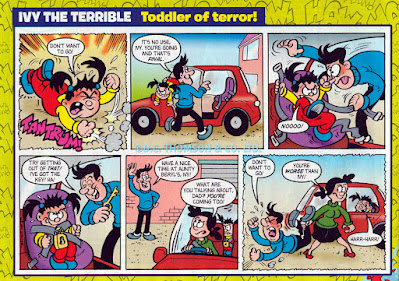 Sorry I haven't updated this blog for a few days. Busy doing my yearly accounts and drawing various things at the moment, all needed soon. I can't show any images from my current artwork yet so I thought I'd delve into my archives and show you a strip I did several years ago.

Back in 2014 The Beano commissioned me to draw a new series of Ivy the Terrible, the strip originally drawn by the late, great Robert Nixon.

This is one of my favourites, which I think was written by John Anderson, who's now the Beano editor! It appeared in Beano No.3757 dated 25th October 2014.

I'm currently writing/drawing a new mini-strip for Beano that starts in March. No, it's not Ivy, but it is another old favourite!

Email ThisBlogThis!Share to TwitterShare to FacebookShare to Pinterest
Labels: Beano, Ivy the Terrible

Fantastic news about the new strip, Lew - can't wait to read it!

Thanks David. Hope you're keeping well and busy!

I hope it's little plum or the three bears

Nice strip.. I'm always in two minds if i prefer the original 'theme' with her trying to be the toughest character around and failing due to being a little kiddy brat more then tough, or when they removed that theme and just went with the character in more everyday stuff..

still good (though she was more at the tale end of alot of the stuff I've read and seen) but mm.. not sure.. without the theme, does become a bit more generic, but that doesn't mean bad.. generic if done well is perfectly fine.

Neither of those, Andrew. Little Plum is long gone.

I wasn't aware the theme had changed, Ryan. I wrote the last series she appeared in (the single tier mini-strips in 2017). Obvioiusly only having three or four panels limited the scope of the story but hopefully the basics of her getting up to mischief remained.

Ivy's first apperence in, beano 2233 (the strip is on the beano website at https://www.beano.com/posts/archive-ivy-the-terrible-no-1 though best not to use there zoom in bit at the top as it has a panel out of order). She carried on the wanting to be tough for awhile before just dropping that angle.

basic but the beano site archives aren't bad, though I do wonder why some of the best scans they have are taken from modern reprint books with page folds.. speaking of which.. Never knew that Jonah was Plug's uncle.. (stated in 2014)

Long gone, you say. Little Plum hasn't even been gone for a decade (a quick look on Comics UK shows he was still around in 2014). Though I don't expect him back ever again now that there's all this fuss over Native American stereotypes, which forced the Washington Redskins gridiron team to change their name a couple of years ago, and the Exeter Chiefs rugby team currently being in the news because of their badge being redesigned to replace the Indian chief with a Celtic one. The last thing Beano wants is negative headlines in the papers.

Glad you're still keeping busy Lew. I've started buying The Beano again from my local comic shop, but here in New Zealand we are several months behind so it could be a long time until I see your new strips!

Thanks George. I think my strip starts in the issue that'll be out on March 9th over here so, yeah, it'll be summer before you see it unfortunately.