MEANWHILE... a highlight of the year

After two years without comics conventions (due to the pandemic, if you're reading this in the far future) it was a pleasure to attend the Meanwhile... In Coventry festival yesterday as one of the guests. I'm still cautious about traveling any distance by train now that many people have abandoned masks or respect for personal space (in other words, abandoned common sense) but as Coventry was only half an hour away on my local bus route I thought I'd go for it. 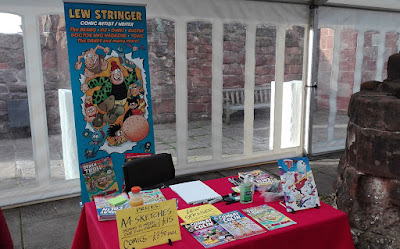 I arrived at the venue around 9am, which was a spacious tent erected in the ruins of the old Coventry Cathedral. (In case you didn't know, the old Cathedral was bombed in WW2 and they've kept the remaining ruins as a tourist spot and for quiet contemplation.) I've wandered through those grounds many times during my life but never expected to attend a comics convention there! As it turned out, it proved to be an ideal venue, - in good weather at least. Thankfully yesterday was mostly a day of glorious sunshine and the well ventilated tent provided lots of light and fresh air. 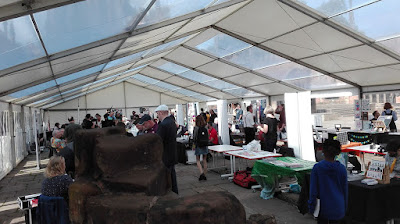 My table was situated alongside my good friends Marc Jackson and Rachael Smith. Across he way were more friends, Laura Howell and Sonia Leong, and elsewhere familar faces such as Nick Brokenshire, John Higgins, Al Ewing, Ian Churchill, Kev F Sutherland, Tony Lee, Colin Mathieson and many more. Over the road in the Herbert Art Gallery were Shane Chebsey, Sam Morgan, and Chris Ball doing their live stream interviews for the ICE podcast. Leonard Sultana was also there filming interviews for his podcast and it was great to see Jeff Chahal of the NICE comic con drop in for a visit. Yes, comic conventions had returned and the positive vibe throughout the day was tangible.

Attendance from visitors was steady but not packed, but that's often the case at new events, and no doubt the pandemic played a part too. I think we all appreciated it being comfortable rather than rammed under the circumstances. There were lots of visitors throughout the day though, with many enjoying the sun in the outdoor activities and strolling over to the Herbert gallery where more exhibitors were situated. 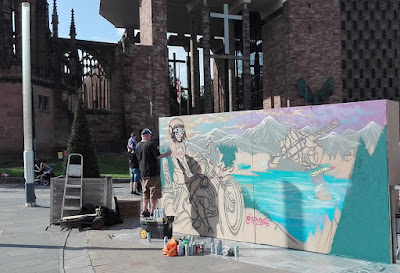 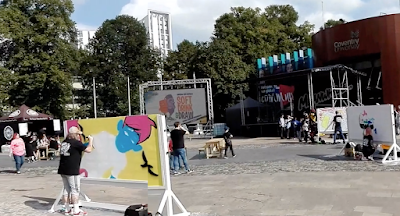 My thanks to Simon Mayers and his team for putting on such a well organised event that provided a genuine boost for us all after two years without shows. I hope it proved a success and, I hope, showed what Coventry has to offer in this year being its turn as City of Culture.

This is most likely to be the only comics event I'll attend this year. As situations are so uncertain these days I don't know when my next one will be but I'll always appreciate the lift that Meanwhile... In Coventry gave me. Definitely one of the few highlights of the past two years.

Email ThisBlogThis!Share to TwitterShare to FacebookShare to Pinterest
Labels: conventions, Meanwhile in Coventry

Thanks for a very upbeat post Lew. I've never been a big attender of cons myself, but it's great to hear you had a good day at Meanwhile.

Thanks Tony. I've always said that convention organisers are the true heroes of the comics industry. They bring people together where long lasting friendships are formed and it's great to meet readers too. There's a heck of a lot of work goes into the shows like you said. Hopefully more can take place next year. I'm already booked for one in May.