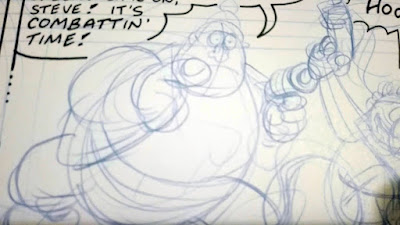 On my drawing board right now is a brand new three page Combat Colin story that I'm doing for the digital comic Aces Weekly!

Yes, the bobble-hatted hero is back for his first new adventure since 2016 (which also appeared in Aces Weekly).

As you'll probably know as you follow this blog, Combat Colin was created in 1987 for Marvel UK's Action Force weekly, then hopped over to The Transformers when the two comics merged in 1988. It ran there until the final issue in 1991, after which, Marvel UK returned the rights to me. I've since produced several Combat Colin collections and the fifth issue will be published sometime this year.

A brand new Combat Colin story debuted in Aces Weekly No.1 back in 2012 and a further three stories followed in various issues. Aces Weekly is published in volumes of seven issues each, and as it's currently on Volume 50, editor/publisher David Lloyd asked if I'd be interested in bringing back Combat Colin as part of the celebrations. I had time in my schedule so the answer was yes!

The deadline for this story is imminent and it'll be online on Monday so I'd better get a move on! More news soon!

You can subscribe to Aces Weekly at this link:

This will come as no surprise whatsoever, but it's very exciting to see the pencils for a brand new Combat adventure!!

Thanks Phil! I'll post more about it on Monday!

Got my hopes up for a moment.
Then I saw it was digital only.
I don't like reading things online.

But you're reading this!