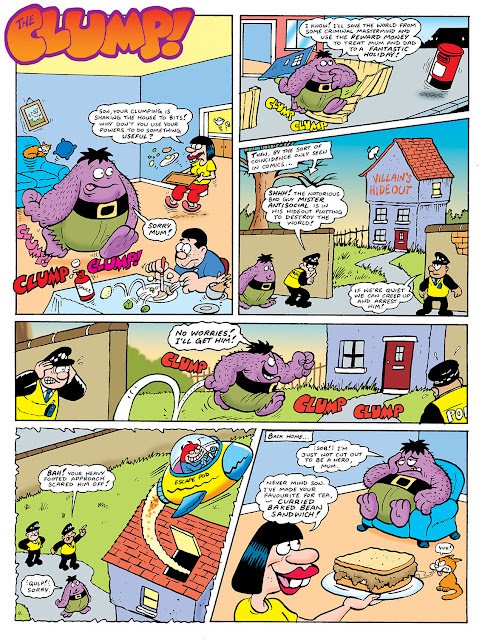 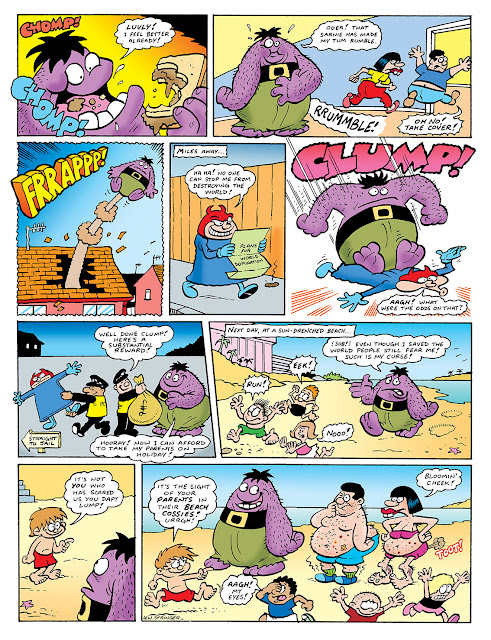 Here's a creation of mine that you may not have seen before. Back in April 2011, Toxic magazine No.137 had a 16 page comic bagged with it. Toxic presents Crazy Comics was full of brand new humour characters from creators such as Jamie Smart, Laura Howell, Paul H. Birch, John Erasmus, John Freeman, Paul Harrison-Davies... and me!

The idea was for readers to vote for their favourite new charcter, and the winner would then get its own regular strip in Toxic. In the end, Jamie Smart's Count Von Poo won, although sadly it was a short lived victory due to parents complaining about it being about poo with a face drawn on it. (As if kids would imitate that!)

My contribution to Crazy Comics was a character called The Clump! This lumbering purple monster had previously appeared in my Team Toxic strip but I thought I'd give him a chance to break out on his own. With this being for Toxic it contained the elements of "gross humour" that readers expected of the magazine.

In hindsight, The Clump probably wouldn't have had much longevity as a regular strip, but I didn't mind not winning as I already had two regular pages in Toxic every issue!

Anyway, ten years on, I thought you might like to see the full two pager of The Clump's one and only solo adventure!

You can read more about the other strips that were in that Crazy Comics special in this old blog post of mine at this link:

They were good days for Toxic magazine, when it contained several pages of originated strips. Sadly these days the only strips it features are bought-in ones such as Teen Titans Go! and its Unique Selling Point of gross humour has been excised from the mag.

Email ThisBlogThis!Share to TwitterShare to FacebookShare to Pinterest
Labels: The Clump, Toxic

I change my style slightly to suit the type of story.

I think it's might have been possible for it to last a bit of time. There were a few ways you could take it from the start, like the whole 'trying to be helpful but failing, only for something good to come of it' which is kinda old hat but what's wrong with that? Of course, that fact reminds me of some of the old comedy pilot try out shows of yesterday where the real 'meat' (as it were) of the show didn't always come out in the Pilot. Prisoner and Escort (from Seven of One) doesn't have a huge amount in common with the series that came from it (Porridge) apart from 3 characters. where that focused on transporting Fletcher to Prison, the show focus on his time IN prison.

Or looking at early series or even strips in many comic strips see how a number of important factors changed over time.. for some reason, i can't think of many examples of the top of my head.. Ah! Tintin! after Herge started doing research into his stories (lack of research kinda plaguing the first three stories) and moved away from the newspaper serialising, that fact Tintin was a reporter didn't really come into it much.. during the first strip, Tintin gets his hairstyle he is known for, and even then, many elements people now come to think of being a core part of Tintin, came much later.. Or Tove Jansson's Moomins.. alot changed in early stuff.. to a point where the Newspaper comics and the Novels don't really work in the same universe.. in fact, later novels drop some of the ideas that were there in the early ones (Like how Snorks are just like moomins apart from the fact that they change colour according to their mood. That didn't really appear much after introducing the feature, and the 'retcon' of Moominpappa knowing the parents of alot of their friends before they even met them and didn't know who they were or anything..

Hey, compare how Combat Colin turned out compared to the early, or even the first strip. Not saying things aren't there, but things take different turns and evolve in interesting ways, so you never know.