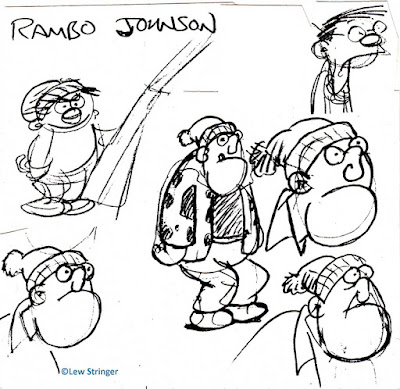 I may have shown these on my blog before but if you haven't seen them they might interest you. These are the rough sketches I first did back in 1987 in a notebook when I came up with the idea of Combat Colin... except back then he was called Rambo Johnson!

As you can see, I'd originally thought of him as a kid character, then quickly dismissed that idea because that was too traditional (and boring). This was going to be for Marvel UK not IPC, so there was no need for him to be yet another kid-with-gimmick.

Then I thought perhaps he could be a weedy-looking character (top right), at odds with his self image of being heroic? Nah, that didn't seem right either.

Finally I had it; a big gormless looking character in a combat jacket, combat trousers... and a red bobble hat because he's daft enough to wear bright red along with the camouflage.

I must have done a more finished drawing than this and submitted it along with some sample scripts to Marvel UK.  The name I settled on was Dimbo, a dim version of Rambo. As I've mentioned before, although Marvel liked it, they felt that being a Rambo parody would date it too quickly. Editor Steve White came up with a better name: Combat Colin! Perfect!

Below is a scan of my original artwork for the very first Combat Colin strip. It appeared in Action Force No.5 in 1987. The strip would outlast the comic, moving over to The Transformers when the two comics merged, and continuing until the final issue in 1991. Later, when Marvel UK gave me the rights back, I revived Combat Colin for new strips including a few in digital comic Aces Weekly. 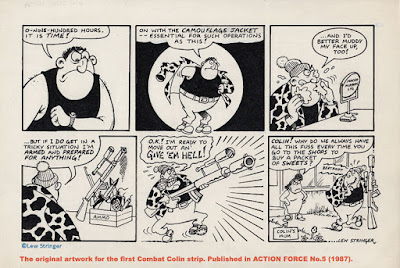 As you know, a few years ago I began reprinting the whole Combat Colin saga from the start in a series of Combat Colin comics. After issue 4 I put the series on hold due to the pandemic (and an absence of comic cons where I used to promote them) but I still intend to publish issue 5 this year (and possibly the final issue, No.6, if I can). No firm plans yet but as soon as it happens I'll post news on this very blog.

you might have shown this but I don't remember it..

a nice thing to see how the creation process worked on the character design.