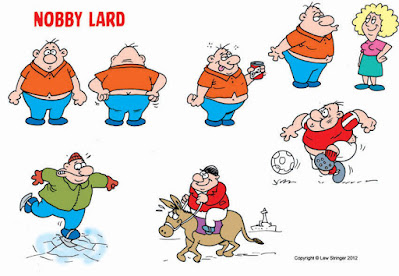 Sometimes ideas just don't work, or submitted strips aren't accepted. One case in point was Nobby Lard, a character I created in 2012.

The client wanted a comic strip for an online betting website they ran, which was a departure from the usual areas I'd worked in. They wanted it to have a sporting theme and be about an everyday type. Not being into betting or sport this seemed a bit of a challenge but I came up with a hapless loser type who attempts different sports and fails.

Here's the e-mail I sent, along with my sample roughs...

Here's my idea for the online strip. Hope you like it.

Nobby hasn't played a sport since he left school but according to his
late Aunt's will, he stands to inherit a million pounds IF he becomes
a sporting champion. That's all the incentive he needs, but it might
take the overweight, easily distracted lump a while to achieve it.

BECKY LARD, Nobby's wife, who loves him but wishes he was more like
David Haye.

Theme of strips: Nobby tries various sports with little success.
Sometimes he can't even understand the rules. Even the thought of the
rules tires him out some times! But he's persistent and keen...
unless the pub's open or there's a good film on TV.

I've attached a character sheet plus three jpegs featuring six
roughly-penciled strips to give you an idea of the type of strip I'm
thinking about. I hope it's the sort of thing you were looking for.

Looking forward to hearing from you. 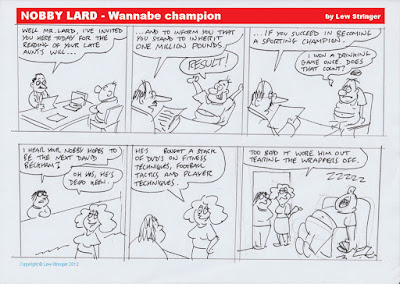 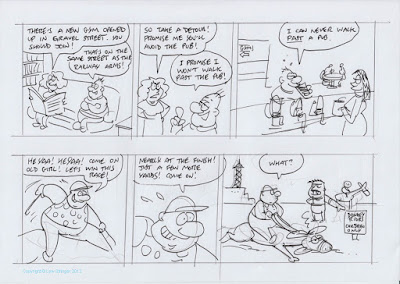 What happened next? Nothing. I have a vague memory that they got someone to do their even rougher version of it and called it something else. Either way, my concept of Nobby Lard was never developed any further. Anyway, in situations like that you just forget about it and move on. (And I had forgotten about it until I found these files tonight on an old memory stick.)

Still, as I own the copyright I thought I'd post some of the pencil roughs here for you to see. Will Nobby Lard return as a fully drawn strip? Nah, probably not, but he's here today so I hope you enjoy him.

Looks good to me ^_^ I wonder if they more wanted some kinda shill though.. character that made money winning at their shops.. that would have been very dull though...

Possibly. Even though it was only nine years ago I've forgotten the details of what they asked for, and although I kept a screen grab of my email I didn't keep one of theirs. It was probably too old fashioned for the times, but I must have thoight that's what they were looking for, and they ended up using a similar character so perhaps they just didn't want to pay up.

Thanks for sharing this Lew, very interesting. Love the poses on the character sheet.

Really like the strip and the concept Lew, and shows how effective a story can be with only six frames. It must be frustrating when you put effort into it and then hear nothing. I'm sure the strip would have had quite a long tenure - just thinking about all the sports Nobby could have tried (and failed) to master!

The client's loss in my opinion, but thanks for giving us a peek at the character.

Thanks Ian. It's actually three panels per strip. I did two on each sheet. I'm used to doing short strips like that and have done many for The Beano. (And of course my Daft Dimension strip for Doctor Who Magazine). There's a nice rhythm to telling a story in three panels. (Although I'd prefer a full page of course as it pays more!)

Thanks Steve. Glad you liked them.

Oops, sorry Lew, I can see it's three panels now! I'm on the autism spectrum, and my 'processing' can sometimes lead to mis-reading things like that.

I get what you mean about rhythm - I guess the length is largely dictated by the subject matter and the characters!

Ah sorry Ian. I can see how you thought each was one story though. The length is whatever the client wants really. Not my decision. Had they wanted a full page I'd have staged it all differently, perhaps with two or three attempts at sports going wrong before the final punchline. Although really I hadn't thought about it in this instance. They wanted three panel gags so that's what I focused on. Every format has its own merits I guess.