WIZ WAR is back! 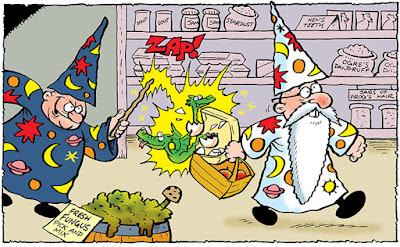 I'm pleased that I can now reveal the mystery strip I mentioned a while ago. I've drawn a new two page Wiz War story written by Kek-W and it'll appear in the Monster Fun Halloween Spooktacular in October!

Yes, Rebellion are reviving Monster Fun comic as one of the 52 page specials this year. Although the original Monster Fun Comic was around before my time as a cartoonist, I did contribute to the Buster and Monster Fun Holiday Specials back in the 1990s so it's great to be back in this all new special!

If you're unfamiliar with Wiz War, the original series began in Pow! in 1968 and then moved over to Smash! when the two comics merged later that year. It's the story of two feuding sorcerers, Wizard Prang and Demon Druid, and was originally drawn by Mike Brown (inking Leo Baxendale's pencils on some episodes I suspect, as they did work like that on some other strips).

Writer Kek-W, best known for his work on 2000AD, and I pitched the idea for the Wiz War revival to editor Keith Richardson last year, hoping it might be in the new Smash! Special. However, as the new Smash! contained solely fantasy heroes it wouldn't really be a good fit. I'm pleased that it'll be in Monster Fun though. A much more suitable home.

There's one panel from our new strip above. In the original strip, Wiz War was usually in black and white inside the comic, and Demon Druid had a black robe and hat. I felt that was too dreary for a full colour strip so I gave him a dark blue outfit instead. Not just any blue though! Trivia Time: Pow! never used black ink on its covers, using dark blue instead, and that's the colour I've tried to emulate for Druid's outfit.

I'm really excited to see how the Monster Fun Halloween Spooktacular turns out. Kids love monsters, especially funny ones! So I hope the comic does well. Like any other business, publishing is full of uncertainties in these troubling times, so Rebellion are publishing less specials than they did last year. I'm grateful to be in one of them! You can read more about it, and the other two upcoming specials from Rebellion, at their website at this link:

Awww that looks brilliant Lew, Monster Fun was after my time as a reader but Wiz Wars was very much from my time and was a favourite strip, well done . The strips in the link all look great so I will be certainly be buying this.

Thanks Paul. They're great characters to draw and the premise has lots of potential so I hope there'll be another chance to work on them again one day.

Really looking forward to seeing them Lew - talk about old memories coming back!

I didn't get Smash or Pow at the time, but clearly remember Wizard Prang and Demon Druid, probably from when the comics came out of the boxes at school when it was bad weather outside!

Ah yes. "Wet Day Comics" they were called at my school. I remember those times well. That's where I first saw Look and Learn, and I was very impressed by The Trigan Empire.

I was wondering if Wiz War had ever been reprinted? I don't think it has. If not, it hasn't been seen since 1970.

Hi Lew,
Demon Druid; I get the name, but Wizard Prang??? Is this a play on words or based on some saying from the 1960s.
Wish success for your special.

I've heard of the strip but not one I've read. Apparently, it also appeared in a couple of Shiver and Shake, and Whizzer and chips annuals.. can't confirm though.

Thanks Ryan. Sounds like the sort of thing IPC would use to pad out an annual.

Anon, "Wizard Prang" was an RAF term, meaning a direct hit. It was old fashioned in the 1960s really but it's a funny name so worth keeping.