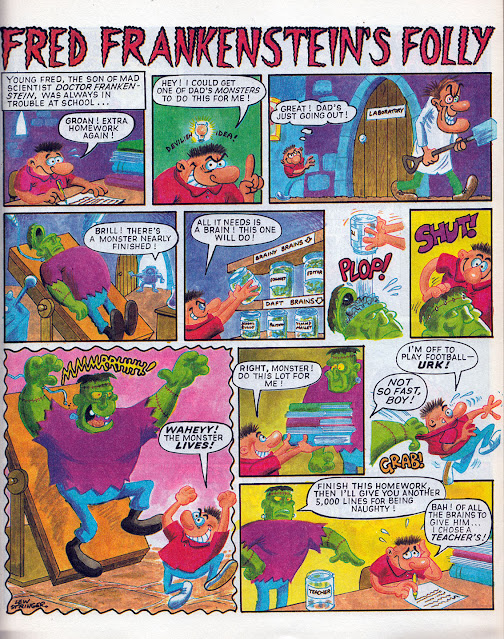 As I mentioned here last week, Rebellion are publishing an brand new Monster Fun Halloween Spooktacular in September and I'm very happy to be one of the contributors. It isn't the first time I've contributed to Monster Fun. Although the original weekly comic had ended before I worked in comics I did contribute to the combined Buster and Monster Fun Holiday Specials during the 1990s.

Here's one of the pages I did for the Buster and Monster Fun Holiday Special 1993. I was a regular contributor for Buster with Tom Thug and The Vampire Brats and they'd appear in the specials as well but Fred Frankenstein's Folly was a one-off strip that I created. I thought I'd experiment with the art, and decided to use coloured outlines in places instead of the usual black. The result? Well... frankly it didn't turn out too well and it would have looked far better if I'd stuck to using black lines. It wasn't an experiment I'd repeat, - a bit like Fred's own experiment!

It works a little better if it's desaturated, but it's still not what I was aiming for... 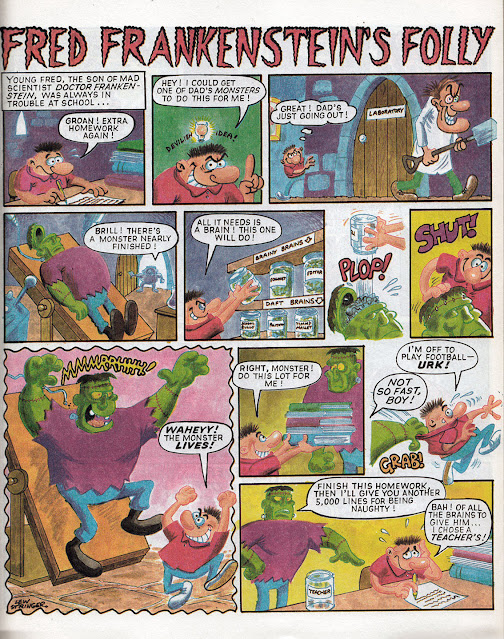 I guess the page turned out to be my folly, but you live and learn. I'm still pleased with the script though, and happy that I got to do a twist-in-the-tale horror comic story! I think the punchline still stands up 28 years later so I hope you like it!

Love the 'dad's just going out' panel, with him walking off, spade in hand!

You got it! Quite a dark gag I was pleased to get in there.

I can see what you mean about the desaturated version being a bit better - to me, the brighter version has a sort of contemporary feel to it, whereas the desaturated one feels more 'classic'.

Thanks Ian. I thinbk it would have worked better if I'd used a smaller colour palatte. It's too garish with the purples, pinks, greens, yellows etc. I've learned a bit more about colour over the years. I also prefer colouring with Photoshop now, rather than the water colour inks I used back then.

I think you are too hard on yourself. I think it looks great. I imagine it took longer with all that shading.

It took a couple of days I think from start to finish. I am self critical but it's the only way to improve.