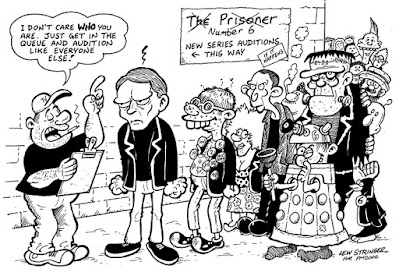 Being an admirer of the classic 1967 TV series The Prisoner I've referenced the show a few times in my strips over the years. I've also provided artwork for charity auctions held by Prisoner fans. One such instance was 15 years ago at the event PM2006, held at Portmeiron, North Wales, where most of the outdoor locations for The Prisoner had been filmed.

Back in 2006, as you may recall, there were rumours and speculations about a new Prisoner TV series, and who might be cast in the role of Number Six, so I thought I'd do a cartoon about that. In the end, as we now know, the series didn't appear until 2009 and it wasn't a patch on the original.

Anyway, I enjoyed drawing this cartoon and it was amongst the items auctioned off to raise money for the Ty Golbaith Children's Hospice. You can read all about the event at The Unmutual website here:

Email ThisBlogThis!Share to TwitterShare to FacebookShare to Pinterest
Labels: The Prisoner

nice ^_^ hey, is that Christopher Eccleston? if not, I think a good likness anyway.

a little while back, there was a new prisoner comic.. if you haven't bothered with it, don't bother. while they screw around with some Kirby promo art which has nothing to do with it, the story isn't much.. Part of what I liked (though not a huge fan) of the original is that Number 6 is just that. While you have the fan theory about Danger Man, Number 6 is just someone you know very little about and the show wasn't really about HIM as a person, but him in a place and him trying to get out.. the comic is all about the person ¬_¬

kinda like how there has never been a decent version of the Fugitive since the original.. it think it's the old comic book problem of 'each creator wants to put his own mark to on the character so everyone will remember him'.. well, not every one but you have probebly seen or know of this ^_^

Yes, one of the rumours at the time was that Christopher Eccleston was going to be the new Number Six.

Yeah, I did buy The Prisoner comic. I think the original TV series said everything it needed to say. There are other stories one can tell about identity and social control of course but they should be told by creating something new in my opinion. The TV show was an allegory about the everyman, which seems to be missed by the comics.