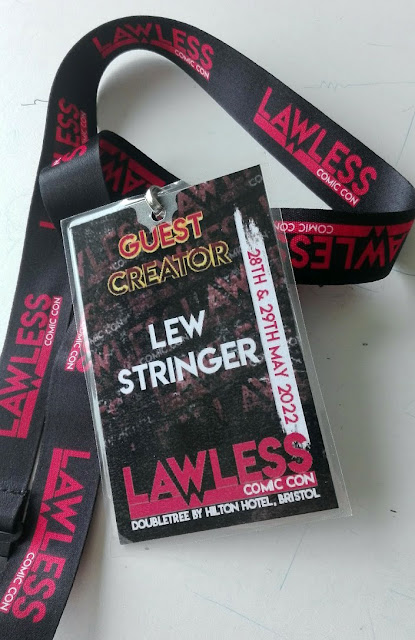 A big thank you to Su Haddrell for inviting me to the Lawless Comic Con in Bristol last weekend and for being a fantastic host. It was my first venture out of my local area in over two years and it was the perfect event to attend. A friendly, upbeat atmosphere with great people and lots of laughs. One of the busiest conventions I've done in 40 years, sketching from the moment I set out my table to the time the show closed. Thank you to everyone who stopped by for a sketch, buy a comic, or just for a chat.

Sadly I didn't get around to catching up with John Wagner or Glenn Fabry or visit the small press room. I did take a break for ten minutes though to visit a fantastic display of comic art curated by Graham Bleathman. Pages from Eagle, TV21, and Look-In brought memories flooding back of reading the comics those pages were drawn for. Graham himself is a fantastic artist of course, having illustrated numerous cutaways for Gerry Anderson comics as well as much more over his long career. Graham and I started out in fanzines around the same time way back in the late 1970s and it's always a pleasure to chat with him.

On Sunday afternoon I took part on a panel hosted by Leonard Sultana alongside my colleagues from The77; editor Ben Cullis, artist Andrw Sawyer, and the legendary Steve MacManus. The77 were also launching a new comic at the show; Pandora edited by Jo Heeley, a 40 page full colour anthology comic that you can buy from this link:

That link will also take you to where you can buy The77, including the Reissue of No.1 featuring some best bits from the sold out first issue and some new content including a back page pin-up from me.

I can tell you now that The77 Publications are doing another comic soon! This Comic Is Haunted will be a brand new British horror comic and I'm hopefully doing a page for it. The Kickstarter for it begins next month and you can find out more details by following their Facebook page at this link:

It felt exciting and strange to go on a train for the first time in 26 months and to mingle in crowds again. Yet in some ways it felt like the past two years hadn't happened as we all readjusted like we'd only seen each other yesterday. Not that we can be complacent of course. The virus is still out there and still spreading, and I did wear a mask on the train.

Summing up, there could be no better place to restart anyone's social life than at the Lawless Comic Con. A fun and welcoming event that I'll always remember.

Joanne Alexander interviewed me live for her Facebook feed on Sunday morning and you can see that here:

I didn't have chance to take many photos but you can see more by visiting the Lawless Facebook page here:

...and if you wish to bid on a signed Lawless programme/comic where proceeds are going to a good cause, read about it here:

My next convention will be Comics Salopia in Shrewsbury on June 25th and 26th, followed a week later by Macc-Pow! in Macclesfield on July 2nd. More details soon!

No offense but your not the first artists I'd contact for doing a horror comic! Have you ever done horror, spooky material??

It's a comedy-horror page I'm doing and, yes. I did strips for the Buster/Monster Fun Hooliday Specials in the 1990s, Vampire Brats in Buster, several years doing Suburban Satanists for the Swedish/Norwegian comic Herman Hedning, created numerous monster characters in my Team Toxic strip for 16 years on Toxic magazine.

Dear “Anonymous”, have you ever tried this thing called “Google”? It’s an amazingly useful resource. As, perhaps, might be a longer look at Lew’s biography on this site.

Thanks John. You would think that anyone who followed an artist's blog would be familiar with their work, but maybe not.

I know your work, thats why I asked. You do funny cute not dark gory horror.

I didn't say I was doing "dark, gory horror" for Haunted. It'll be comic-horror like the other stuff I've done over the past 40 years.

Oh, I did Li'l House of Grind for Alex DeCampi's GRINDHOUSE comics too for Dark Horse. That's the sort of thing I mean when I say comic-horror.
https://lewstringercomics.blogspot.com/2015/12/grab-grindhouse-for-christmas.html

Good to see that Haunted will have a humour strip. Comic horror featuring heavily in the titles I grew up with, it's probably my favourite subgenre. Long been fond of your monsters, aliens, and assorted wee beasties, so really looking forward to getting the bugger.