The 35th Anniversary of OiNK! 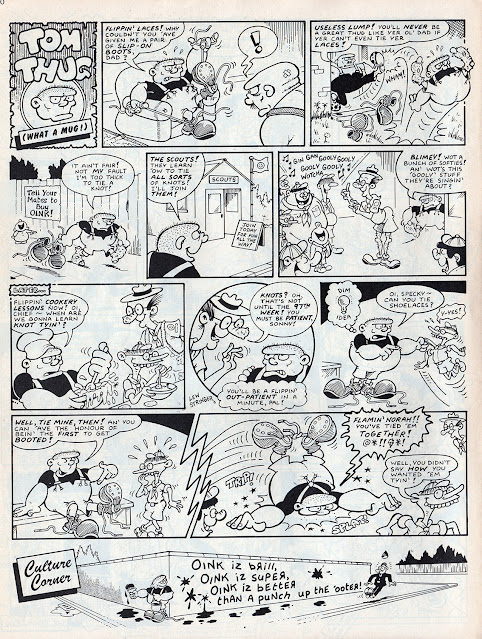 It was 35 years ago to this very day when Oink! No.1 arrived in newsagents! A preview issue of the comic had appeared a week earlier as a free gift in Buster, Whizzer and Chips, and Eagle, but today, 3rd May 1986, was when the first proper issue went on sale.

I distinctly remember buying a couple of issues from WH Smith that day. (IPC never gave us freebies.) It was an exciting time for me. I'd only been working professionally as a cartoonist for three years and being in an IPC comic for the first time felt like another step forward in my career. Even though I'd been freelancing for Marvel UK for a while, IPC had a long history going back to Fleetway, Odhams, and The Amalgamated Press, so this felt like I'd become part of the traditional timeline of UK comics.

My contribution of course was writing and drawing Tom Thug, the brainless bully. I've previously shown the very first Tom Thug strip that was in the Oink! Preview Issue in this post:

However, today I thought I'd show the Tom Thug story from Oink! No.1, that readers would have seen on this day in 1986. It's shown at the top of this post.

I'd been a big fan of the Odhams comics Wham!, Smash!, and Pow! as a boy and their style of irreverent, visually robust humour was the inspiration for my Oink! work.

I know people think that we were trying to imitate Viz but that couldn't be further from the truth. Most people hadn't even seen Viz in 1986 as it wasn't yet distributed to WH Smiths and suchlike. Editorially, the biggest influence on Oink! was Mad Magazine, and (for my part at least) the aforementioned Power Comics. Most of us were just doing our own thing, inspired by various sources, but mainly driven by a desire to create funny comics! 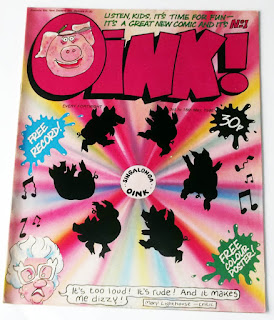 Oink! ran for 68 issues in total, before merging into the more traditionally tame Buster in 1988. I was fortunate to be one of the only two cartoonists to move over to Buster from Oink! (Mike Green being the other). Tom Thug became more of a standard school bully after the merger, but proved popular enough to survive in Buster for many years.

As I've stated before, Tom Thug was never an anti-hero. He was always depicted as the villain whose schemes would backfire on him. He was never a character to admire, but to laugh AT, not with. One of the few exceptions being the 'Culture Corner' mini-strip at the foot of the page above, where Tom seems to get away with his graffiti, but it's suggested that the trail of dripping paint will lead the policeman to him.

Working for Oink! comic was a happy time in my life and career. I wrote all my own material but I also wrote strips for others too. Many of us were new to the business and the editors allowed us to develop our skills and to experiment with layouts and storytelling styles. There really hasn't been a mainstream British comic like it since, and that's a shame. Happy anniversary, Oink!

On this special celebratory day be sure to check out these links too! Andy Luke runs a podcast and in the latest one he's chatting to Oink! historian Phil Boyce. You can listen to it at this link:

Phil runs the OiNK BLOG that all fans of the comic should be following! Every fortnight Phil will be reviewing each issue on the date it would have been published 35 years ago, plus he keeps people updated on the work of ex-Oink! contributors and suchlike. He does a good job of it and you'll find his blog at this link:

Happy anniversary to you too, Lew! I can imagine how big a day this must've been for you. I read the issues of Buster and Whizzer and Chips the preview issue came with just recently, and the difference when moving on to OiNK is staggering! What an impact it must've made to readers. My only regret is that I didn't discover it until #14, but then again that was not only my first OiNK, it was my first ever comic so I can tell you it made quite the impact with me too. Thanks so much for the kind words as well, this "OiNK historian" moniker seems to be sticking 😂

You're welcome, Phil. You deserve the "historian" tag after all the research you've done on the comic. What a great comic to introduce you to the world of comics!

I remember at the time that Bob Paynter told me some of the more established artists wanted to work on Oink! but he stood his ground and refused as he wanted it to be fresh and new. Allowing some of the more veteran artists on board would have turned it into another Krazy, which was something IPC definitely wanted to avoid! (The feeling was that Krazy hadn't lived up to the concept of it being a different kind of comic and was far too similar to Whoopee, Buster, etc.) Tom Paterson got work on Oink! of course because Bob knew he could do the funny, off the wall stuff the comic required, but he was an exception to the rule.

Not that I'm suggesting Oink! was better than other comics. I'd better clarify that before it gets misunderstood bu certain parties! It just needed to be different, and have its own identity, which it certainly succeeded in.

Fantastic stuff Lew. It's quite a big deal, writing the strips as well as drawing them - not many people can pull this off. Interesting what you said about never getting freebies from IPC comics either: I had to buy all my own stuff too! I used to buy Oink at Morrisons in Keighley - it was the highlight of the week and I've kept them all. Somebody in the trade told me that it failed because Mary Whitehouse and her other `Christian' zealot pals had it moved from the bottom shelf where the kids could get their hands on it to the top one. What a shame - it was the best comic ever - with the possible exception of Wham!, where Leo Baxendale also wrote and drew loads of the strips...

Thanks Roger. I think quite a few of us wrote our own material for Oink!. Jeremy Banx certainly did anyway, as did Tony Husband and David Haldane I believe. I suppose it's because I started out writing/drawing my own comics as a kid that I always saw it as an integrated thing. I have worked from other people's scripts at times though, and I've also worked solely as a writer (on comics like Sonic The Comic, Lego Adventures, and CiTV Tellytots).

Yes, Oink! was shifted away from the children's section with issue 8 after a parent complained to the press about a 'Janet and John' spoof in issue 7. Back in those days Viz wasn't in Smiths so there wasn't even an adult comic section. Therefore Oink! was shoved anywhere the staff felt like it. I saw it next to Nursing Mirror one week and next to Caravan Times another week! I complained to the staff at WH Smith but they just said "We had an internal memo from head office. We can't put it with the children's comics." Quite pathetic, but it's a measure of the loyalty of Oink's readers that they still sought it out. It ran for two and a half years, which was longer than many IPC comics. It could have lasted longer though if it had been left in the right place.

Great read Lew. love the little details you get into the drawings.

Thanks qamer. Glad you liked it.

I was well past Oink!'s target age range, but I loved it anyway.

I still feel one of the few times anyone at IPC got Dan Dare right was in Ham Dare, by yourself and Malcolm Douglas. Yes, I know, a parody, but a loving and beautifully done parody.

Thanks David. That's nice of you to say. I really enjoyed writing those Ham Dare stories and Malcolm was the perfect artist for it. I think if Oink's critics had actually bought the comic and seen the quality of his work they'd have understood what we were doing more clearly.