When I was working for Toxic magazine I was often called on to draw activity pages in addition to my regular two page Team Toxic strip. These could range from spot illustrations to more complex spreads, the latter being the "I-Spy" features.

(Yep, this isn't the Sparky's I-Spy, although I did draw his final adventure as featured here:

The I-Spy features for Toxic were double page spreads where the readers had to find certain characters within a crowd scene. The one shown above featured a street party for the Queen's Diamond Jubilee in 2012. I was given a brief by the editor which mentioned some things I had to include but it also included stuff I'd come up with too.

The image above is my finished art but I thought you might be interested in seeing my rough sketch for it as well... 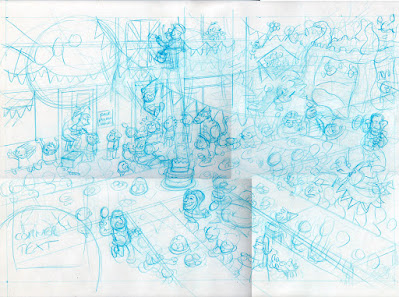 In case you're wondering about the empty areas at the left of the images, that is where the logos and suchlike would go. These spreads usually had to be turned around fairly quickly considering the work involved so I developed a simplified version of my usual style.

These were enjoyable to draw and I miss them. Over time, budget cuts on Toxic meant that such fun features were dropped. Then more budget cuts led to all my work for Toxic being dropped, initially temporary in theory, but since the pandemic affected sales of magazines that became permanent. (Toxic now uses licenced strips such as Tiny Titans, presumably at far less cost than originating UK material.)

I had 16 years on Toxic which is the longest I've ever freelanced for one title. (Although my years on Viz must come close.) Still, onwards and upwards to whatever comes next!

Email ThisBlogThis!Share to TwitterShare to FacebookShare to Pinterest
Labels: Toxic