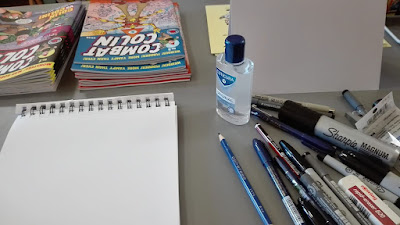 Thanks to Marc and Jane Jackson for a brilliant MACC-POW! yesterday in Macclesfield and for looking after guests very well. (Thanks to Marc's pal Tristam Maddocks for the lift from the station. I couldn't walk up that cobbled hill very well with current Tendinitis.) Good to see Ché Michael again as Spider-Man meeting me at the station!

It started off quietly as most shows often do but became quite busy from mid-day and I enjoyed drawing various sketches for people.

What really made the day was catching up with friends such as Laura Howell, Tim Quinn, Sean Phillips, Dan Whitehead, Charlie Adlard, Emmeline Pidgen, Sonia Leong, Kev F. Sutherland, John Jackson and more, albeit too briefly in some cases. Good to meet new people too such as artist Sayra Begum and Tim's publisher Iman Kakai-Lazell.

Speaking of Tim, I must give a plug to his latest book, Monster Marvel Memories which is a chunky volume covering the comics careers of Tim Quinn and Dicky Howett and the work they produced for Marvel, IPC, and many other publishers (and also Tim's work with other artists such as Charlie Adlard and Steve Parkhouse). The book is like a scrapbook of memories and strips compiled by Iman Kakai-Lazell and is worth a place on any comic fan's bookshelf! You can order it directly from the publisher at this link: 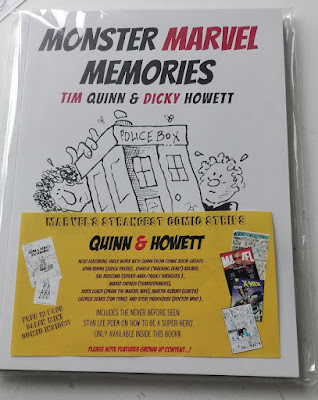