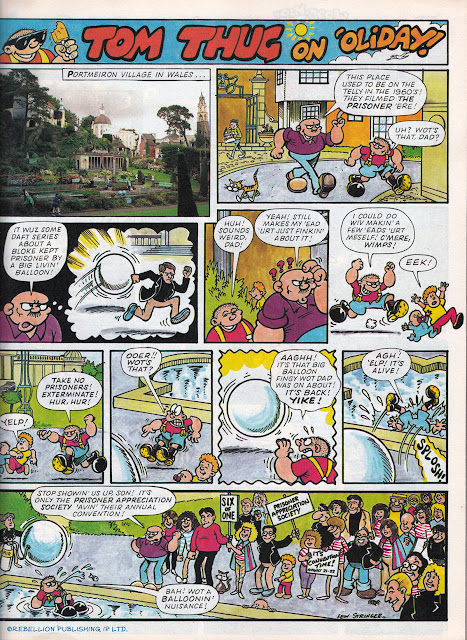 When I was doing the Tom Thug strip for Buster I always had him go on holiday during the six-week school break. Even the strip itself changed its title to Tom Thug On 'Oliday during those weeks. For the 21st August 1993 issue of Buster Tom and his Dad visited Portmeirion in North Wales.

By that stage I'd been a regular visitor to Portmeirion myself for several years. Friends of mine were part of the co-ordination team that organised the annual conventions dedicated to The Prisoner, the unique 1960s TV series starring Patrick McGoohan. For this story I timed it right so that the issue would be published a week before the convention as a free advert for the event. Fortunately the editor was up for it so there was no problem with Fleetway charging advertising fees.

(Incidentally, if you're wondering who the "Rover" is in the title of this post it's the name of the strange white sphere from The Prisoner, used to keep people from escaping the Village. In reality it was an inflated weather balloon.)

I could have done an illiustration of Portmerion for the first panel (as I had when I put Combat Colin in the village a few years earlier) but I liked the idea of using a photo for authenticity. I had loads of photographs I'd taken of Portmeirion over the years so it was easy to find a suitable one to use.

The people in the final panel are all based on friends and acquiantances of the time. (Well, some are still friends to this day.) The guy with the big nose is the late cartoonist Tony Reeve, based on the way he'd draw himself. (Tony was a regular attendee too.) The guy in the red shirt is professional magician Dave Jones, who also appeared in Combat Colin strips as The Amazing Dave. Next to him (with the stripey shirt) is journalist Howard Foy, who also played a part in Combat Colin strips as Headline Howard! Everything is connected in the Lewniverse!

The Prisoner Appreciation Society was at its peak in those days and the conventions were great. Several of us used to stay for the rest of the week after the con for a holiday, having hired the cottages in Portmeirion. By 2001 things weren't so good within the fan club and problems with the unethical behaviour by some of the other coordinators led to many of us quitting the society. (Which we still consider to be one of the best decisions we ever made and have no regrets over walking away.)

If you're interested in The Prisoner TV series I highly reccommend The Unmutual Website. It has no connections to the fan club and is a totally free rescource of information and news. You'll find it at this link:

As a bonus, here's part one of the Combat Colin serial which was set in the Village, which I did for The Transformers comic back in 1989... 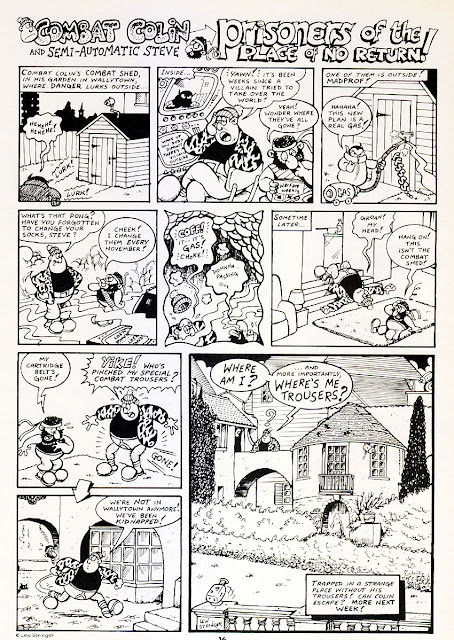 The question mark in Tom Thug story reminds me of number 6 upside down!!

Super stuff Lew, thanks for brightening my day a tad!

The question mark above Combat Colin's head is deliberately an upside down 6 if that's the one you meant, Peter?

Thanks MJ! Glad you liked it.

I remember hearing something about the Appreciation Society having... issues..

anyway, working out the amount of strips and stuff you have done over the years referring the prisoner.. boy, that's a pretty long list.

I wanted to see if anyone would spot me. Some did on Facebook.

Yes, there are numerous refrences to The Prisoner in my old strips. Perhaps I should have done one in Ellis's Great Escapes as that'd be the obvious one but it'd be too obscure for young Beano readers.

Too obscure? I'm not so sure about that considering this week's Minnie the Minx strip has her say "I'm not a number! I'm a free girl!" - which of course is a reference to The Prisoner.

Really? I'll have to see what I can do then. Only two left to draw and I've already written the scripts but perhaps I can sneak in a cameo.