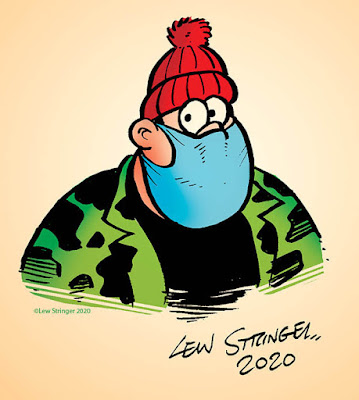 I thought I owed you all an update on the situation regarding my Combat Colin collections. Sorry to say the comic is still on hold at the moment and I have no immediate plans to publish issue No.5 yet.

I had hoped to publish Combat Colin No.5 in October, and there's even a podcast interview coming out soon (recorded weeks ago) where I announced that, but on reflection I'm holding fire for now.

This pandemic situation has affected me more than I realised. Health wise I'm ok, so far... physically anyway. The restrictions have affected my mental health more than I expected though, not socialising with anyone for six months, and worrying about what the future holds for us all. I met up with a few local friends last week and that helped a lot though. I miss my comics pals and comic shows a lot

Obviously everyone living alone is in the same boat so I'm not trying to make out it's all about me! It's far worse for people with families that have been separated by the situation.

It has taken its toll more than I realised though, and I need to get back on track into a more productive schedule. I do have more work coming in now, and I also need to catch up with existing projects, so for the time being Combat Colin and all other self-published ventures are on hiatus while I focus on my mainstream comics work.

As things stand now, there won't be another Combat Colin comic until next year. I may do another digital compilation like Barmy Comix No.1 but that's at the back of my mind at the moment.

Anyway, I thought I'd be open with you all about the situation so that's how things are right now. I'm sure we all know how hard it is to be optimistic at the moment and I appreciate that delaying a comic is of no importance in the bigger picture.

Meanwhile, this blog will continue to report on all my mainstream comics work that's coming up, and I'll dip into the archives at times too to show you some pages from the past, so I hope you'll continue to check in regularly.

Sorry to hear you've been struggling Lew, this is such a rubbish, stressful time, thinking of you.

Looking forward to putting an order in for Combat Colin when he does appear again :)

Thanks Leo. I feel bad about mentioning it really because there are so many in far worse situations, especially those who have lost loved ones due to the virus. I just need to get my mojo back.

No need to feel bad about mentioning your struggles, Lew. We all have to get through this as best we can , so if the occasional venting on your blog helps, feel free.

I suspect most of us are just hanging on by focusing on routine and creating our own semblance of normality. Never thought I’d be grateful of my job but it’s made all the difference these last few months.

As Leo said, we’ll all be ready to snap up Colin when he’s published again. Look after yourself in the meantime.

Thanks Tony. Much appreciated. All the best to you too.

Thanks for pointing me towards this post Lew, it's another I missed in the mess of this quarantine and pandemic. I'm getting caught up now and that applies to my own blog too. In fact, I think a post like this on my own site might be quite cathartic, as I think this has affected me more than I've admitted to myself. But as Tony says, I'll be another reader ready to jump on the next Combat Colin comic whenever you can release it. Apologies that I haven't been in touch as much recently, and I mean it when I say I really hope things pick up for you real soon!

Thanks Phil, and I hope life treats you better soon too. I think we're all experiencing effects from this situation that we don't immediately realise. The only people who seem unaffected and swanning through life at the moment are those who tend not to be very empathic or not tuned into life even at the best of times.

Hope you are well Lew. We really are living in strange, scary times. Like everyone else on here, I totally understand for this delay. Even though I still remember all of the Combat Colin adventures from the Transformers UK comic, I still can't wait to receive the next collection. But more importantly is your health and wellbeing. Stay safe and thanks for updating us all.

Thanks Darren. Hopefully I'll bring issue 5 out by the Spring but I'll see what the situation is like.

Sorry to hear you're not on top form, I had been wondering about the website not working as I tried to look over every so often to see if issue 5 was out. Even though having all the marvel originals, a nice book of them all helped relive my childhood.

I hadn't considered how these kind of projects are not really cost effective so totally understand why they are on hold but hope they may return when the rest of the world gets back to normal.

Just a quick question where does this stand for issues 1-4, do they need to be reprinted etc and are equally time consuming because I'd love to buy extra copies to distribute as xmas gifts for friends children, I'm sure others would also be willing to purchase a few if this did represent a help financially to you? Either way stay safe and stay positive.

I'm feeling a lot better since I posted that two months ago but thanks for asking. Yes I'm afraid my comics are still on hold. Some need reprinting but that's not going to happen until next year now, and I'll have to decide whether it's worth, say, doing a third printing of issue 1 when most people who want them have already purchased it. I still intend to complete the run of six issues but not until 2021. As well as the financial aspect of printing costs I really don't want to be going to the post office every day, especially as many local people aren't respecting social distancing or wearing masks.

Combat Colin will return though, eventually! I also have plans for other comics, but at the moment I'm not scheduling anything. All the best, Lew