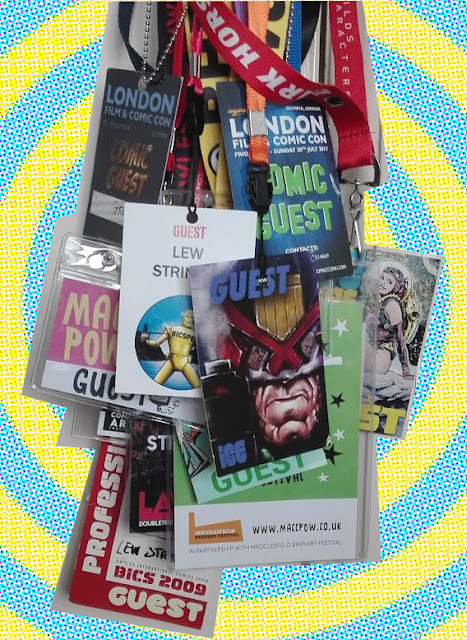 My plans to get back onto the convention circuit this year didn't quite pan out as hoped. I had to cancel attending Blackpool Comic Con in May because Achilles Tendinitis made my ankle too painful to walk distances, (it's getting better now), cancelled my trip to Comics Salopia in June because of other health issues and a doctor's appointment, came home early from LFCC in London in July because I was ill with something else (turned out to be Covid!), can't get to British Comics Day in Stockport this weekend because of the rail strike, and now ICE2022 is cancelled next month.

However, the few shows I did attend were thoroughly enjoyable and it was heartening to see old friends and meet new people at Lawless (Bristol), Macc-Pow! (Macclesfield) and LFCC (even though I had to cut that one short).

ICE2022 was going to be my last convention this year so now that's cancelled I've no events lined up for the future at the moment. (Not that I'm blaming Shane Chebsey for having to cancel ICE. I completely understand as I said in my previous post.)

I won't be seeking out any more shows this year anyway because of financial setbacks and ongoing health issues that need sorting out. (I have work to do now but health issues have slowed me down.) Hopefully if things pick up I'll be invited to some shows next year, although the way things are I'm making no plans just yet.

I've been to numerous conventions since 1979 and after two years hiatus due to the pandemic it was pleasure to catch up with friends in the industry and meet readers this year at the three shows I could get to. A real boost in troubling times. Thank you to everyone who stopped by for a chat or to buy a sketch / comic and to my many friends in the business for laughs and good company. It really meant a lot.

If I am invited to future events that I can attend you'll read about it here first. In the meantime, we'll keep in touch on social media and I wish you the very best for the coming months.

Still no Combat Colin isse 5 then. Its not going to happen is it? Just tell us FGS.

Combat Colin No.5 will be published in time, as will other comics. Please have patience. When it comes to a choice between paying ultility bills or printing comics I'm afraid I have to choose the former, but don't write it off yet.

We have been patient for three years. Where is the comic? If this was crowd funded we would of had it by now.

Not necessarily. One reason I don't use crowd funding is in case something happens and I can't post out the comics. I'm asking you to be reasonable and understanding. No one has paid for my comics in advance so I'm not obliged to prioritise them ahead of my health or mainstream work.

If things pan out I *will* publish something soon. That's all I can say.

Not good enough. I'm waving bye bye to your comics.

political corrctness and wokeinsm is part of the problem, its killed comics and now guys like you cant get the work.

No, David, that's nothing to do with it at all.

I can't believe the comments on here today. Wishing you good health Lew.

I logged on to say I'm sorry to hear about your convention schedule because I know how much you were looking forward to getting back on the road. Glad you were able to enjoy a couple at least.

But then I read some of the previous comments. I'm always staggered by some people's sense of entitlement. How do delays to Colin #5 have anything to do with the main point of your post? It's not like you'd have been selling it or taking orders at Blackpool or ICE.

The anonymous crowd funding comment made me laugh. Just take a look at Kickstarter and the sheer number of fully-funded but non-delivered projects that have been languishing for years.

Back on topic, your words struck a chord here. I've found the year since the great re-opening has been tougher than the actual lockdowns and pandemic. I'd like to think 2023 will be better but the signs aren't good. Still, got to stay optimistic and keep pushing onward.

Yes, I'll never use crowd funding if I can help it. Sounds like a lot of extra work adding stretch goals etc and keeping on top of it all. I don't enjoy admin work and like to keep things simple; for readers to order the comics when they're printed and I post them out.

Combat Colin 5 (and other comics I had planned) would have appeared by now if I hadn't lost regular work in the pandemic when publishers cut back on material. Then other factors came into play, plus the now-soaring cost of living, and it all piles on. I wonder if our anonymous friend has ever published anything in their life?

What an infantile comment and how rude. Such an odd attitude to have towards an artist you like and appreciate.

I suspect he's trolling, or feels entitled. Either way he won't be missed if he really is "waving bye bye". Perhaps he's Andy Pandy.

Lew - how about this for an “alternative plan”?
Publish Combat Colin #5 now (OK, so you won’t be able to pay your bills but, with they way the economy is going, you soon won’t be the only one) BUT, under NO CIRCUMSTANCES do you sell a copy to “anonymous”. That’ll serve them right. Ha ha. OK, so you might end up homeless, but you would have the moral high-ground. Whether that would be sufficient to keep you warm and dry when Winter comes around I can’t be certain…
A less radical plan might be for “anonymous” to GET A F#*KING GRIP on reality and stop being suck an entitled d1ck. 😤🤬

Aargh… I meant for anonymous to “stop being SUCH an entitled d1ck”.
Damned auto-correct

Yes, it takes all sorts I suppose.