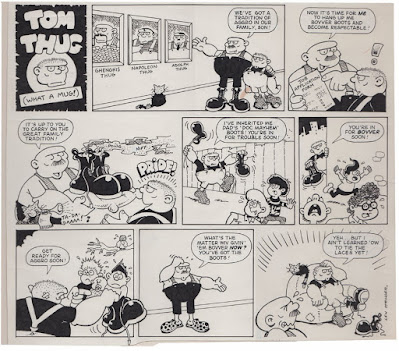 I've posted both of these pages on separate posts in the past but I thoiught I'd repost them together so you can see the changes in the design of the character.

All comic characters take a while to find their "look", and even then keep evolving over the years. This first Tom Thug strip (above) was drawn in 1984 for the Oink! dummy issue. It took a while for IPC to give Oink! the green light so it didn't appear in print until May 1986, when it was one of the strips in the Oink! Preview issue given away with various comics a week before Oink! No.1 launched.

As you know, after two and a half years, Oink! merged into Buster in 1989 and Tom Thug continued there. The page below is from Buster dated 9th July 1996, which was the final Tom Thug strip before Buster went to reprint. (Tom continued as a reprint series until the final issue at the very end of 1999.) 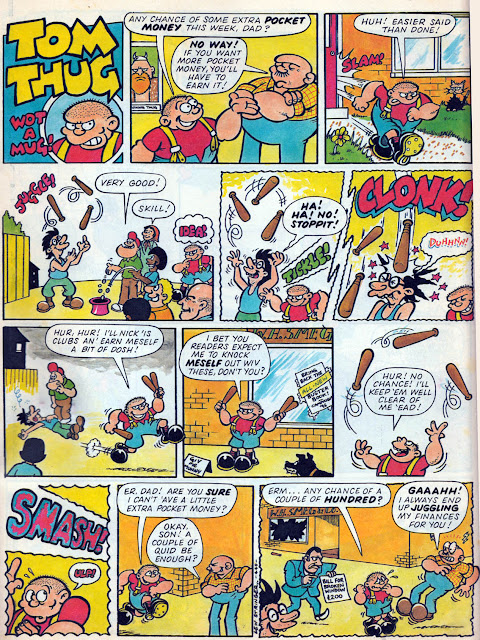 I didn't know that would be the last Tom Thug page when I submitted the script. The news broke a few days later, but when I drew it I added a few personal bits. The lady in the headscarf is based on my mum, that's me in the foreground of that panel, and my dog in the panel where Tom is outside the shop. The juggler is Pete from my old Pete and his Pimple strip, finally cured of his giant pimple. The number 440 next to my signature means it was the 440th Tom Thug strip. (Yep, when I heard it was ending I counted them all, including annuals and specials.)

I did bring Tom back for a cameo apparance in the two recent Cor!! Buster Specials (below) but he didn't have a lot to say. Script for that one was by John Freeman, but I wrote all the old Tom Thug strips myself. 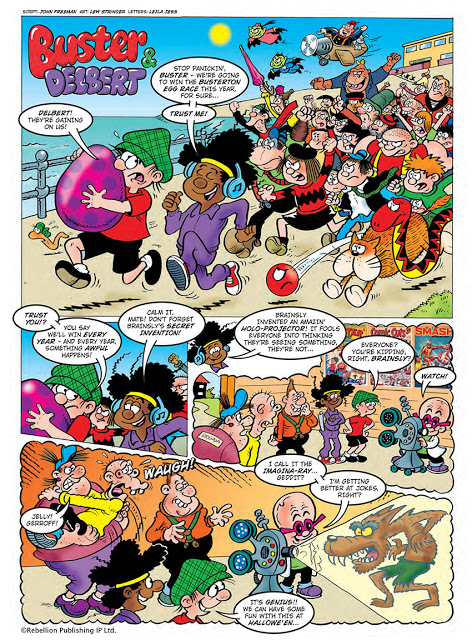 I always made sure that Tom was portrayed as the villain, and there was never any doubt of that, with his bad behaviour always backfiring on him. Will Tom Thug ever return? He's part of Rebellion's universe now and there's nothing in the pipeline unfortunately but maybe one day! If not, never mind. He had a ten year run, and another three as a reprint, so he made his mark!

I love that first Tom Thug strip, so funny!

Would be great to see a new solo Tom story if there are more Cor Buster specials.

nice strips.. and poor J edward oliver.. being pretty much the last artist on the payroll for Buster... that final Crazie Masie/Wacky Jackie...

Jack also designed the letters pages on Buster but it's a shame how reprints edged us all out eventually. Jack was a good choice to do the final page though!

Thanks Leo. I'd like that too but there's nothing planned unfortunately. :(