The Daleks are back in print! 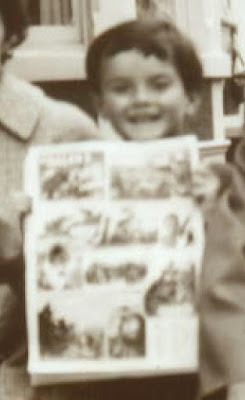 These days I'm fortunate to be able to put comedy Daleks into my Daft Dimension strips for the official Doctor Who Magazine, although I've been a fan of them all my life. I was just the right age for 'Dalekmania' when I was a child in the 1960s. Look at that happy face in the photo above. That's me in 1965, age 6, excited because I'd just found out I could still get that week's TV Century 21 even while on holiday in Blackpool. The reason I'm proudly showing the back page to the camera is because it featured my favourite comic strip - The Daleks!

I was obsessed with Daleks at that age. Some of my first drawings at school featured Daleks drawn in crayon, and of course I had some of the toys and was in the queue to see the big screen movie version of Doctor Who and the Daleks at my local Ritz cinema. I still remember the excitement of sitting in the stalls and looking up to see those Daleks in full colour for the first time. (Remember this was in the days of black and white television.)

Obviously I wasn't the only one. Far from it! Daleks became a huge cultural phenomenon. For many years, fans of a certain age have hoped those Daleks strips from TV21 would be reprinted... and this week they will be!

Panini UK have put together a new publication collecting all 104 chapters of the 1960s strip written by David Whittaker with art by Richard Jennings and Ron Turner. Pages have been mostly scanned from the original artwork, plus there are bonus features and a new cover by Mike Collins. The Daleks collectors' edition will be out this Wednesday, 11th November, in bookazine format for just £9.99. 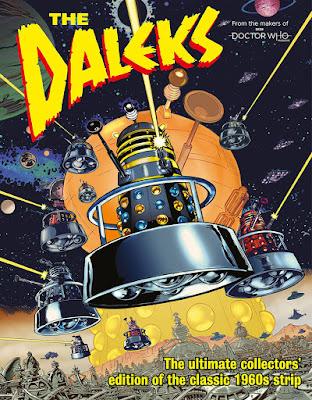 It'll be available in WH Smith... but unfortunately it's possible that some branches might be closed due to lockdown. (Mine is currently open but I'm not sure for how long.) However, you can buy it directly from Panini by clicking this link:

To find out more about this exciting special, visit the Down The Tubes blog by clicking on the following link which will take you there:

Email ThisBlogThis!Share to TwitterShare to FacebookShare to Pinterest
Labels: Daleks

(This is one of the things I miss about your Blimey! blog and your heads ups).

I was too young at the time but the Daleks are one of my favourite all-time villains and have been itching to get a copy of their TV Century 21 adventures for ages.

Not sure if my WHSmith is open as this is one of those that do not open on a Sunday.

It's now available from their website post free, Sid, so I've used that option just in case.

My WHSmith is open so will check for it later on his week. Else I will order from Panini.

I didn't get the weekly publication, but had a TV Century 21 Annual bought for me in the late 60s (which featured Captain Scarlet, Thunderbirds, and Zero X on the front cover). I've been a lifelong fan of Gerry Anderson's output, so naturally I enjoyed reading the annual very much. I remember it also having humour strips featuring 'Get Smart' and 'The Munsters' too.

I would guess a lot of people of all ages would share your enthusiasm for the Daleks. Doctor Who has had countless adversaries, including The Cybermen, The Ice Warriors, and so on, but The Daleks must be at the top of most people's favourite monsters/villains list!

Yes, I'd say the populartity of The Daleks has always far exceeded that of the other monsters, and even that of the Doctors themselves. They're such a great, unique design, and such a straightforward concept.

Is this the same stuff that was published as a Dr Who Magazine special in the early 90s as The Dalek Chronicles? I already have that but I'm still tempted by a shiny new edition!

Yes, the same stories that were published a generation ago but most of this one is scanned from the original artwork, plus there are bonus features and the format is more sturdy.

Went to get my copy from my local WHSmith today but was told that it hadn't come in and suggested going to Sainsbury's instead. One trip later and I now have my copy.:D

The WHSmith guy told me that I was the fourth person to ask so obviously popular even in a small town up north.

I've heard of loads of people unable tio get theirs from Smiths but found it in Sainsburys. Some cock-up with Smiths there no doubt.

In this era of "one-click-and-you've-got-it" internet shopping, this seems to be an elusive item to get hold of - at least from a postage-free source.

The Panini site keeps giving me error messages whenever I click on to it and other sources seems to be sold out.

Hopefully, it will prove popular enough for Panini to do a second printing.

The Panini site has sold out, twice now. It re-stocked on Monday morning but sold out again in three hours, which is why you're getting an error message.

I knew it'd be a huge seller. I hope theyu've printed enough to re-stock again. Sadly, some people snap them up to bung them on eBay at inflated prices. (£60 was the highest I've seen, and someone bought it!)

Just picked up the only copy in my local w h Smith today. Very pleased

Good stuff! Pleased to hear that at least some WHS has put hem on display!