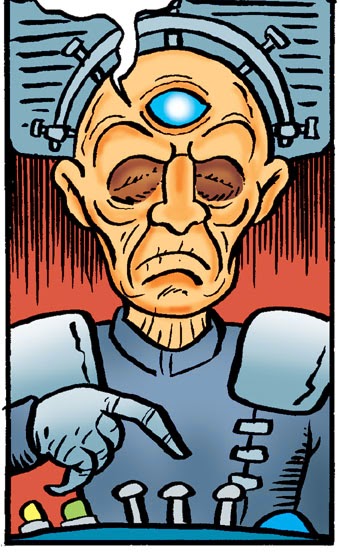 One of the most enjoyable things about doing my Daft Dimension strips for Doctor Who Magazine is getting the chance to draw the classic monsters in an official capacity. This month, I thought I'd have Dalek creator Davros guest starring in the strip. Here's a small preview of part of one panel.

See the full strip in Doctor Who Magazine No.486, on sale Thursday 30th April.
Posted by Lew Stringer at 17:35 No comments: 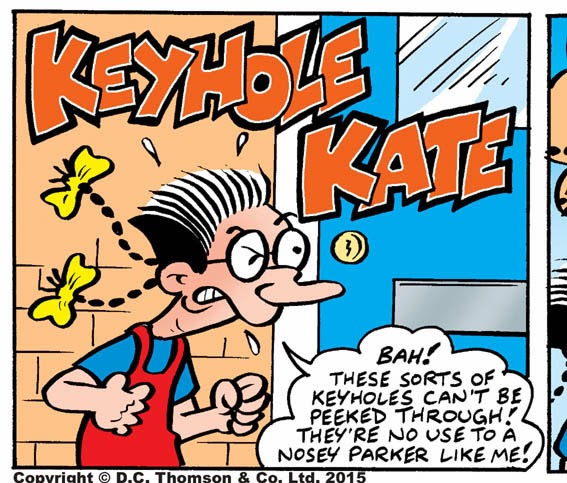 Again, my apologies for not being able to attend the Birmingham Comics Festival (see previous post). As a tiny bit of compensation for anyone hoping to see me there here's an advance preview of some of the work I did for forthcoming annuals.

I'm sure you'll be pleased to know that although The Dandy folded over two years ago after a valiant last stand, The Dandy Annual 2016 will be out this year, full of new material again. I was commissioned to write/draw/colour/letter 10 pages in all, featuring The Smasher and Keyhole Kate. (There's a panel from one of the Kate pages above.)

And here's part of a two page Smasher strip. I've brought back Smasher's old pal Willie for this one. I also re-used one of the original logos from the 1960s as a nod to the past.

For The Beano Annual 2016 I've written, drawn, and coloured 3 Lord Snooty pages. The lettering will be added in-house although I designed the logos. Here's a preview of the opening panel to one strip... 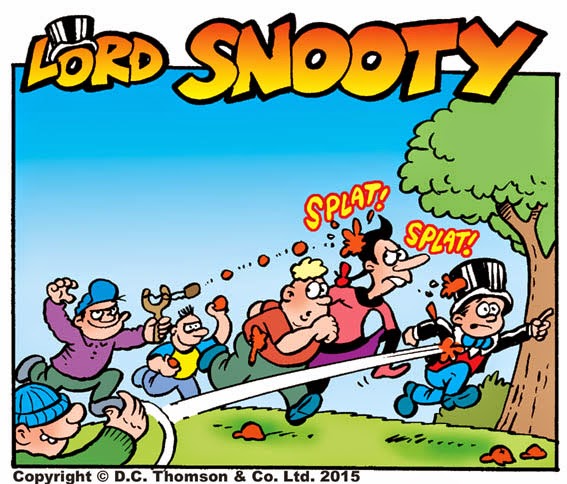 Both annuals are scheduled to be published in July, although from my experience shops may hold them back until September but they should be available online in July. In fact you can pre-order them from Amazon now if you wish.

Support the British Comics Industry! Buy The Dandy Annual and The Beano Annual this year!

(Right, that's me finished for the weekend. Back to my sick bed.)
Posted by Lew Stringer at 17:21 No comments:

I'm very sorry to say that due to a persistent virus/flu I won't be able to attend the Birmingham Comics Festival tomorrow. I'm annoyed with myself for several reasons because of this, especially as I was one of the first guests invited by organiser Steve Tanner who is one of the good guys in the UK comics industry. (Steve's also the publisher of Time Bomb Comics. Check them out.)

I'm also sorry to not be able to meet up with friends and colleagues old and new, and that I'll miss the readers who are attending. I was really looking forward to going and I'm gutted not to be there. My sincere apologies to those of you who were bringing comics along to be signed and/or hoping to buy a sketch. I hate letting people down.

By sheer bad luck this is the second event in six months I've had to cancel due to some virus or other. All the months in-between I've been as right as rain!

On a positive note the guest line-up is so amazing that I'm sure my non-appearance will have no impact on the enjoyment of those attending. It sounds like it's going to be a fantastic event and the weather forecast is excellent so I'm sure that everyone who attends will have a great time.
http://www.thecomicfestival.com/home

Posted by Lew Stringer at 07:46 No comments: 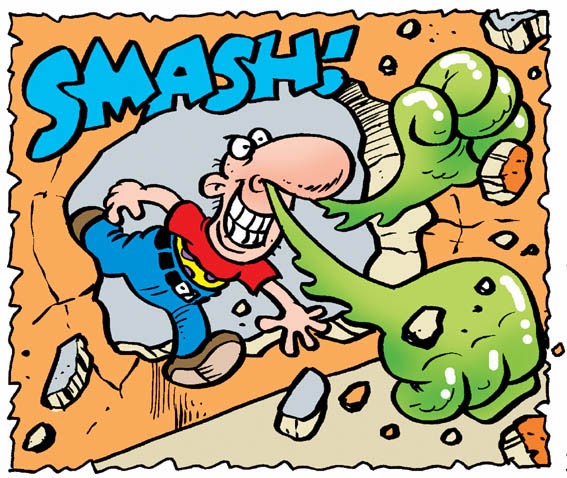 Mister Nostril may be bunged up, er, banged up in prison in the current Toxic but in the next issue he breaks out for revenge against the people who put him there. Yes, Team Toxic are in his sights in the story I had to call Nose on the Run in Toxic No.253, on sale Wednesday 15th April!

And as fate would have it I'm currently laid up with a nasty chest infection. I won't go into details but the picture at the top of this post gives you a clue. I'm hoping to be ok for the Birmingham Comics Festival on Saturday though! Right, I'm off for an early night with a hot cup of lemon and honey with a dash of ginger root. It's a rock and roll lifestyle being a cartoonist!
Posted by Lew Stringer at 23:06 3 comments: 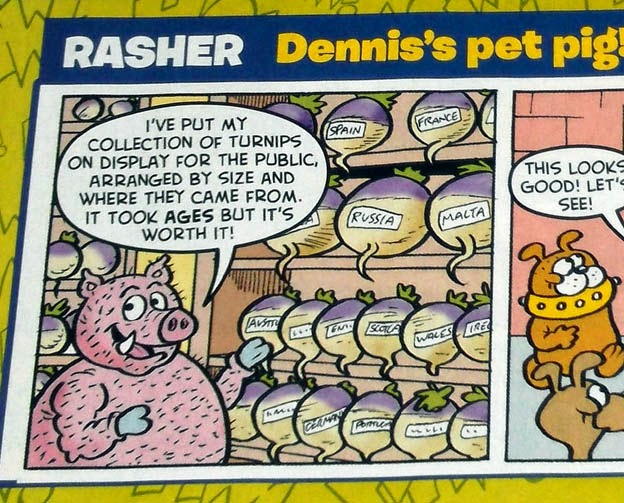 This week's Beano (out now) sees the final Rasher strip in this series (which was postponed from last week) and my last work for the comic for a while. Such is the unpredictable nature of being a freelancer but I hope to be commissioned for new strips in the near future. I've had a good run in The Beano and I'm proud to have been part of such a great line up of artists and writers during such a great period for the comic. The Beano is still brilliant every week so Never Be Without it!
Posted by Lew Stringer at 22:02 No comments:

Email ThisBlogThis!Share to TwitterShare to FacebookShare to Pinterest
Labels: Rasher, The Beano

Don't forget that comic shows return to Birmingham again on April 18th with the new Birmingham Comics Festival at the Edgbaston Stadium! I'll be there. Will you?

Posted by Lew Stringer at 00:18 No comments: 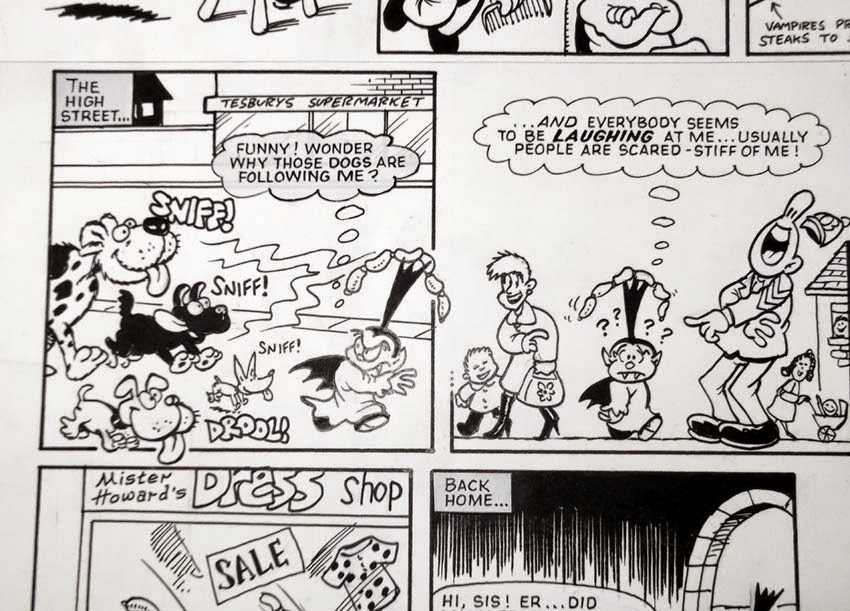 I've put a couple of new items for sale on eBay today. They're pages of original artwork I did about 25 years ago. Firstly there's a Vampire Brats page from Buster circa 1989/90, written by Roy Davis, drawn by me. 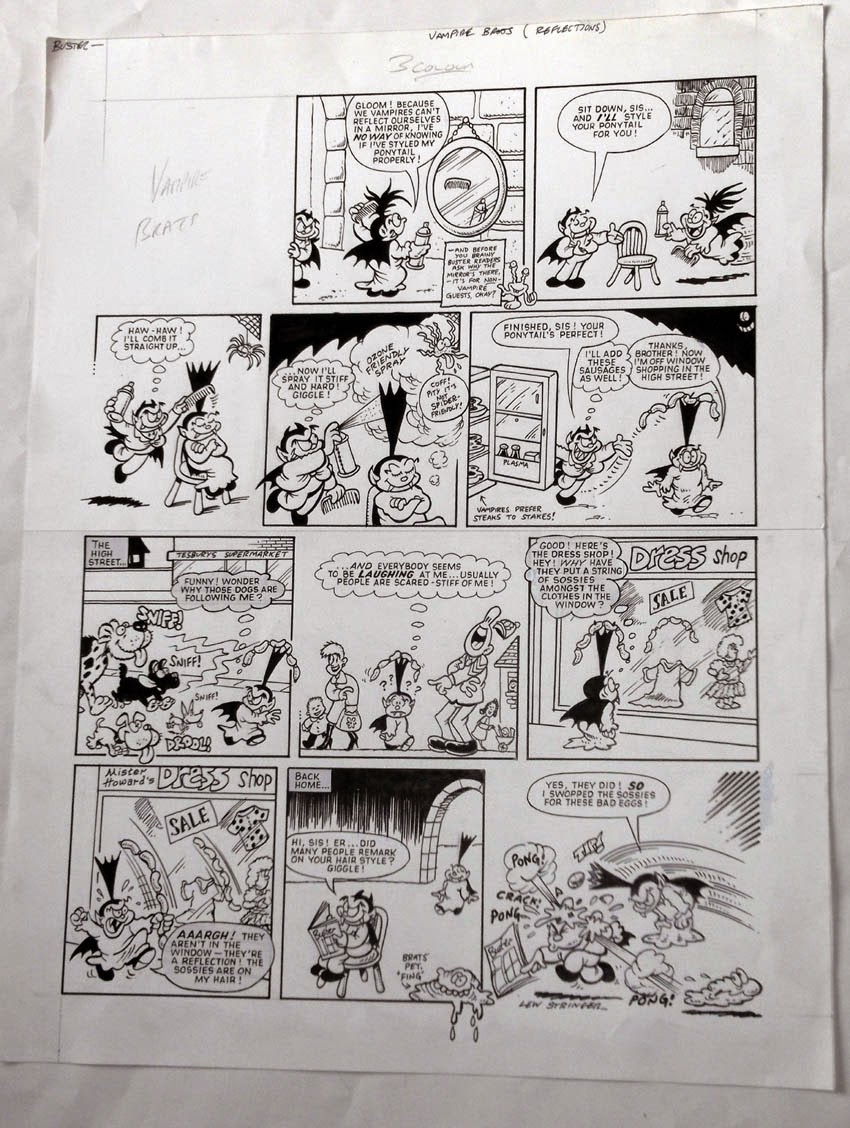 The other item is a bit unusual. It's a two page strip featuring Albert O'Balsam and his Magic Hat that I drew for the Viz Pathetic Sharks Bumper Special in 1991. Script is by Chris Donald, layouts by Roger Langridge, and artwork by me. 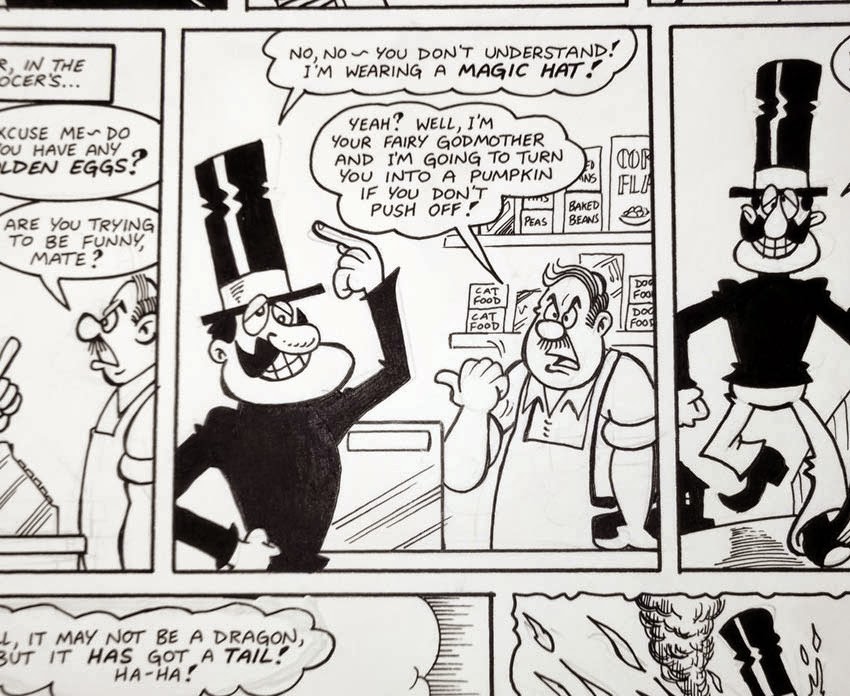 If you're interested in bidding, or simply seeing more photos of the strips, you can visit my eBay page by clicking here:
Buy my stuff! :)

Bidding ends next Sunday (April 12th). All bids appreciated. Thanks in advance!
Posted by Lew Stringer at 22:40 No comments: 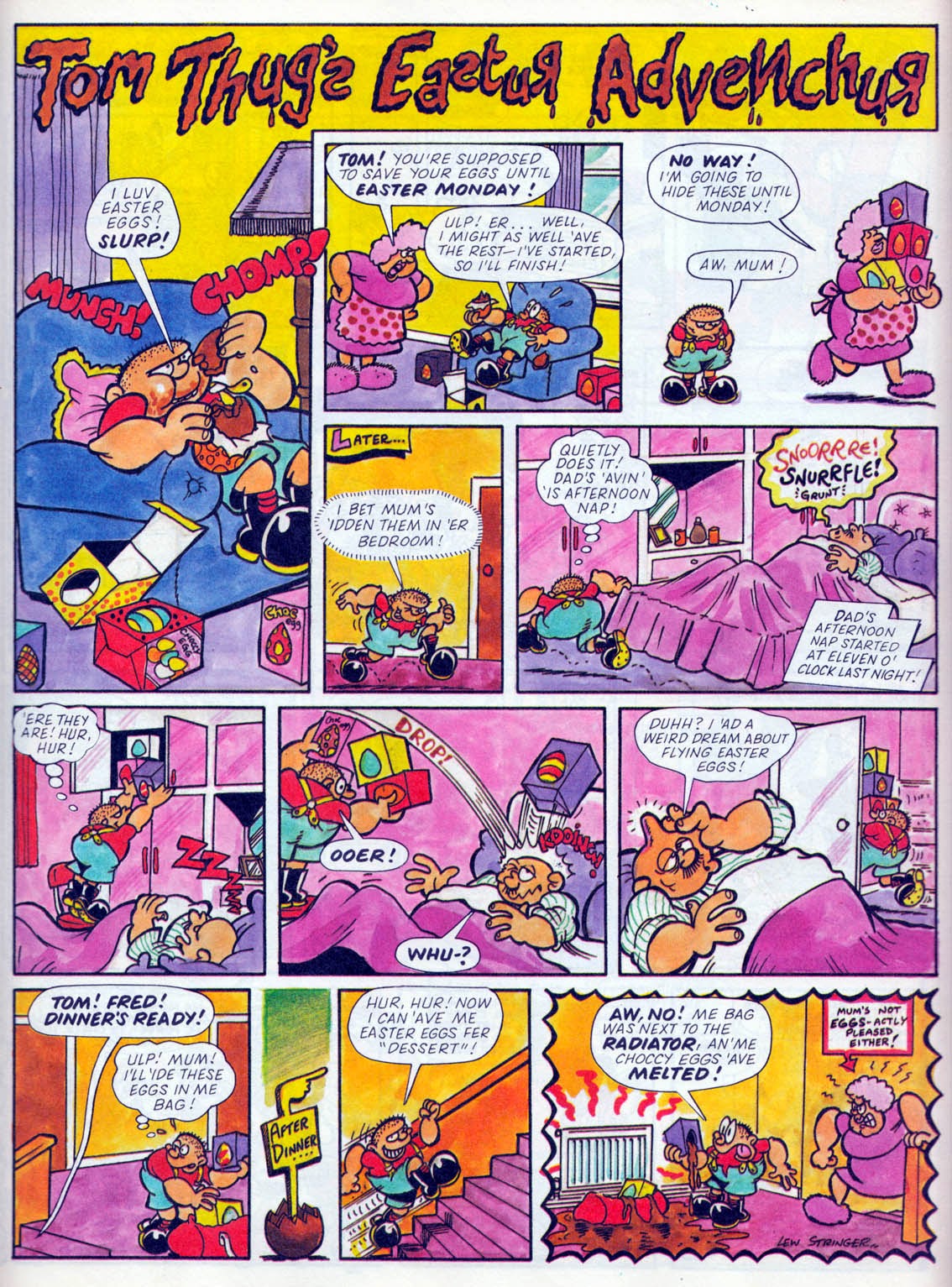 Here's the Tom Thug page I did for the Easter issue of Buster 24 years ago! (Issue dated 30th March 1991). Script, art, colouring, logo design and sound effects by me, dialogue lettering by Jack Potter.

Pink is way too dominant a colour on this page but the idea was that Tom's Mum (who always wore pink) would be the one to have chosen the bedroom decor and it'd be funny that Tom's Dad, an unsophisticated brutish thug, slept in a bedroom with pink sheets, pink wallpaper, and a pink wardrobe unit. I should have used a much lighter pink for the background though. It's all a bit too heavy and the brush strokes too visible.

I drew that page back in the days when I used coloured inks, years before I had a computer. I prefer colouring with Photoshop far more than I ever did using a brush. Computer colouring is ideal for revising the colours before settling on the finished result, and I feel it suits my style better.

Anyway, I hope you like this old page, despite its garishly clashing colours. Happy Easter!
Posted by Lew Stringer at 00:24 4 comments: 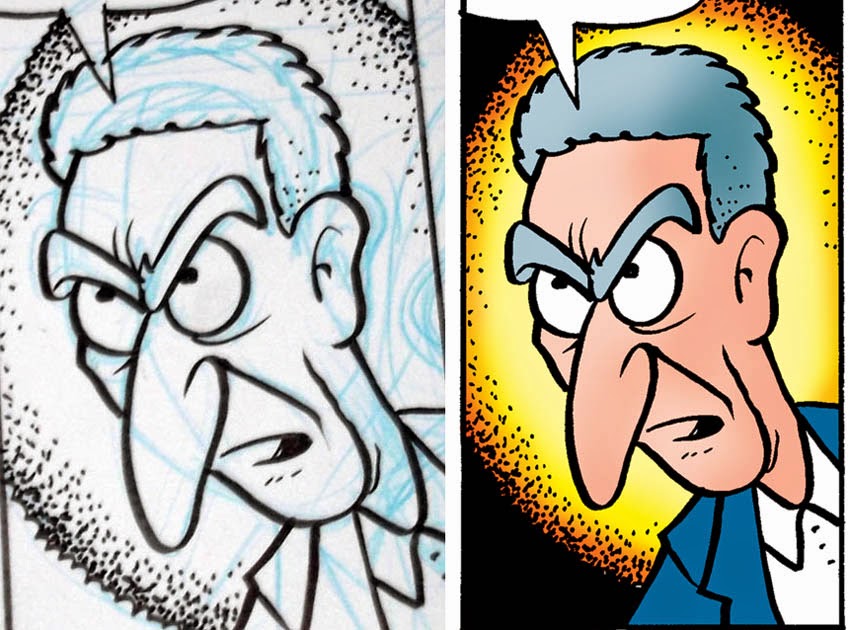 I sent off another completed Daft Dimension strip to Doctor Who Magazine yesterday. It's a four panel strip so I won't show much of it here or it'll spoil the gag but here's a close up of part of one panel. On the left is a photo of the original artwork showing my blue pencil sketching and the inking and on the right is the finished version after I'd scanned it into Photoshop and coloured it.

Anyway, that's the strip for next month's issue. If you want to see this month's head for your newsagent, supermarket, or comic shop tomorrow (Thursday April 2nd) when the official Doctor Who Magazine No.485 hits the shelves. 84 packed pages of features and strips for just £4.99. More info at the mag's website:
http://www.doctorwhomagazine.com/
Posted by Lew Stringer at 22:37 4 comments: