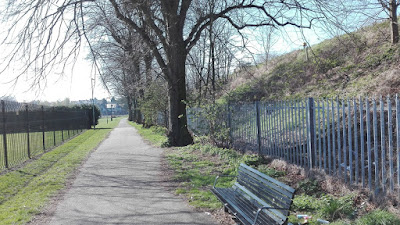 I hope everyone's doing ok? I've just had my government-sanctioned once-a-day walk to Sainsbury's and back to get some fresh fruit and veg (and ok, I bought a pizza as well). Plenty of food in stock, which made me appreciate the efforts of farmers, suppliers, and the distribution chain more than I used to.

It wasn't very busy in there at mid-day. Everyone was respecting the distance and giving way to each other with a calm smile and a nod. At the moment everyone seems subdued and extra polite, like we're shy children on our first week at a new school.

Several buses passed by on my journey. This is the main route to and from Coventry and every bus was empty except for one that had a solitary passenger. I took the route through the park on my way there. Again, we all adopted a good distance between us. The quietness of everyone's shared understanding coupled with the glorious weather gave a deceptive impression that we were living in a Utopia. If only we were. It's early days of course but if people can maintain such dignity it gives me some hope for humanity. Look after yourselves and each other. 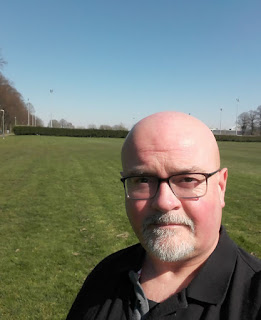 (Do I have any comics news to tell you? Well, I had a message en route telling me my regular Beano work was ending immediately, so I'm afraid that's all I can report for today. The comic itself is continuing though so readers will still have their weekly Beano and as I've worked weeks ahead I'll still be in there until late May.)

good that people around you are acting right. by the sounds of things, one of the main sources in the UK for spreading is London.. People are still packing into overly crowled underground trains ¬_¬

Most shops aren't doing too bad IF people act right. Don't panic buy, don't overly crowd etc. for various reasons, I don't deal with large crowds at the best of times, right now.. well.. right now I don't like going out not for fear or catching something, but just the large crowds.. but luckily, it's not been too bad cause if you go at the right time, everything is fine.

the Limit on how much you can buy and how many people in stores at once is good, but it does mean ALOT of people (even when they try to pace them out) hanging around outside the shops.

all in all, things seam to be going okay here.. though we seam to have a lot of nasty people as I think 3 Iceland's delivery vans were wrecked..

I've spent the last hour communicating with friends all over the UK and they all report similar experiences to mine today, with calm dignity and everyone respecting the space. I think the media might be exaggerating things a bit. Tube travel was down a third this morning, although it's always going to be busier in central London than anywhere else. Yes, there'll be idiots ignoring it deliberately, or vandalising stuff, but I think for our own peace of mind and survival we should focus on the ones who are doing it right.

yep. I do have a bit of a low view of humanity as a whole though there is a short but not bad 1980s 'a conversation with' show with 2 hosts, but the guests were Isacc Asimov (does anyone not know how good a writer he was? though much better at short stories then his long ones), Harlan Ellison (another great writer, though.. He was HIGHLY passionate about writing, and sometimes that could be a down side with his nature.) and Gene Wolfe who.. I don't know too much about.. I think I know of his work but that was it.. anyway, Harlan Ellison said something that I really think is worth remembering about Humans, no matter how bad you might think they are..
"for the first time, with 1 exception, we have a weapon, and no-one uses it.". It does go on but it's worth noting how there is hope for humanity.. cause we have the ability to do something, some totally nutso people have had (and still have, looking at the worlds BIGGEST owner of nukes, who store them all around the world) and no-one HAS used it.

anyway, the program was a little public broadcast thing in America called 'Conversations on the Arts and Letters', with the three writers I said about, and it was from.. 1982 I believe.. worth watching.. though the two hosts (like the one in the middle who sounds like he is drunk of his head) should have listened to the people more and talked less.. cause.. well, Harlan Ellison and Isaac Asimov are both worth listening too,, but together? great anyway.. that does cheer me up in people.. humanity might be stupid, but not THAT stupid.. a good thing to remember

Thanks for the update Lew. I was particularly interested to find that you live down the road in Nuneaton. It’s a small word.
Most of all though, thanks for re-introducing me back into comics through your Blimey! blog. It really is a fantastic resource which I worked through from start to finish. Until then, I had only seen comics as being something I fondly remembered from my youth. However, your reference to Rok of the Reds led me to investigate, and to my surprise I really loved it, and have got back into comics again after many years! I was staggered to find that Commando comic is still going strong, and re-introduced that to a number of my friends. Thanks for that.
Take care during the current emergency and keep up the good work. Gary 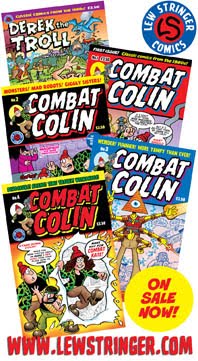