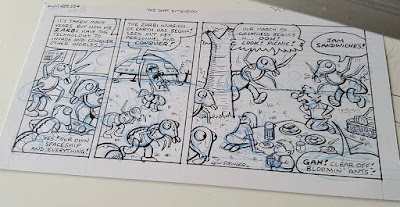 Every single one of us has seen this year change our lives and our plans for 2020. The impact on our jobs and careers is a relatively minor part of the decimation that COVID-19 has caused, but its effects are still being felt and will be for a long time to come.

It seems incongrous perhaps to talk about comic strips in this context but the pandemic has affected the livelihoods of comics creators along with everyone else. If the virus hadn't swept across the planet the Liverpool Heart Beat Magazine I contributed to would have seen more issues than just its premire edition. It launched just as the lockdown began, and that put paid to that, but hopefully it'll return one day.

Ellis's Great Escapes, which I do for the Beano would have ended at the start of summer, and I had been commissioned for a new series to replace it. Then the pandemic hit and Ellis (and other mini-strips) were immediately dropped from the Beano to be replaced by puzzle pages. Ellis is back now, for a run up to Christmas, but I've no idea about work beyond that yet.

With the loss of income, I decided to put my Combat Colin comic on hold. Issue 5 would have been published in April, and No.6 would be out around now, but everything is on hiatus is now until 2021. There are no conventions where I can promote it, and even though I usually sell my comics by mail order I really don't want to be standing in a post office queue every day, especially as our local staff aren't enforcing social distancing or the wearing of masks!

Thankfully Doctor Who Magazine was still a constant and my Daft Dimension strip (shown above) has continued to run throughout this year, so that's been some help. And The77 was launched, with Sgt.Shouty in there, which is reaching a growing audience. Over all, this situation hasn't been condusive to coming up with ideas for humour strips though and isolation does affect one's mental health.

So, in a personal "What If" scenario things would have been a lot different but I'm managing to survive and count myself luckier than many people. Even though some days it feels like we're taking one step forward and two steps back, like all of us, we have to look forward with as much optimism as we can muster.