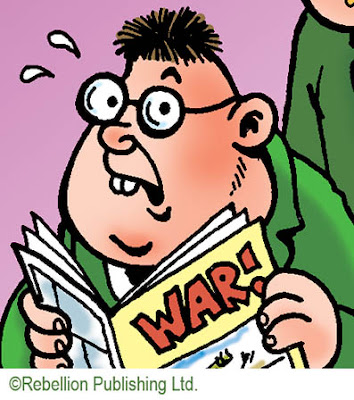 Now here's a character no one expected to see again. At least not in the pages of Battle!
Rebellion's revival of Battle comic as a 100 page special will be in the shops this September but it's ready for pre-order now! New strips from top class talent including Garth Ennis, Alex De Campi, Glenn Fabry, Alan Hebden, Staz Johnson, and many more!
There's even a small contribution from me, as Specky Hector, the Comics Collector returns for a new audience! The character originally appeared in Oink! in 1986, and then ocassionally in Buster in the early 1990s.
You can order your copy of Battle (of Britain) Special at this link:
https://shop.2000ad.com/catalogue/RCS2063 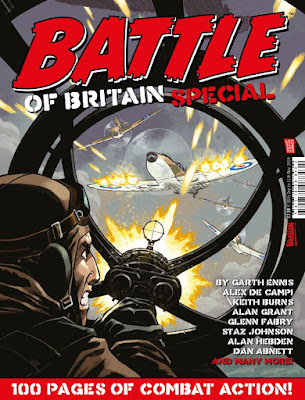 Email ThisBlogThis!Share to TwitterShare to FacebookShare to Pinterest
Labels: Battle

Brilliant news! It'd be great if it did well enough for them to consider bringing it back as a regular monthly title. Same with the Buster/Cor specials. Do you think they ever would? Or just keep them as yearly outings?

I don't know what their plans are but I would hope they might make one or two of the specials more regular IF they sell well enough. Of course, Covid-19 has thrown a spanner in the works so how that's affected sales is anyone's guess. Sadly, the Cor!! Buster Special's shelf life was throughout the entire time we were in lockdown, so only a few Smiths that remained open (and some corner shops, like mine) actually had it there for people to notice. I just hope that online sales were good.

Rebellion blundered there. They should've extended the Cor!!Buster special's on sale time, even if that means overlapping with the next special (it's not like there's a shortage of shelf space, some other mags, like the Marvel Collectors Editions from Panini, were put on hiatus). It won't have sold anything like as many as last year's, which will harm it's chances of getting a third edition.

They didn't blunder at all. Publishers can't just tell shops to keep comics in stock longer than arranged. These things are sorted out in advance. Besides, the people who'd need to negotiate such things were all working from home, or not working at all.

Was the Buster/Cor special the one which was exclusive to WHSmith? Is so, then it was never released here in Northern Ireland as we don't have those stores. But with Easons now shut, Rebellion will struggle to sell over here unless they start supplying directly to dedicated comics shops.

No, it was on sale in newsagents too. I bought some from my corner shop. It *should* have been on sale in comic shops but of course they were all closed during the time it was published. Your best bet is to order it directly from the publisher at the Treasury of British Comics shop.

All of Rebellion's specials are available from comic shops by the way... if the shops actually order them of course.